audeonic
May 2019 in General App Discussion

Announcement for all my Audiobus friends.

I have just pressed the release button on StreamByter version 1.4. This was only going to be a bug fix release but I got carried away and have very significant new features for you.

First, the GUI controls box now has 16 customisable controls. As well as sliders, we have buttons and dropdown menus. The layout of the controls box is eminently configurable from the script Here’s an example of a work-in-progress GUI: 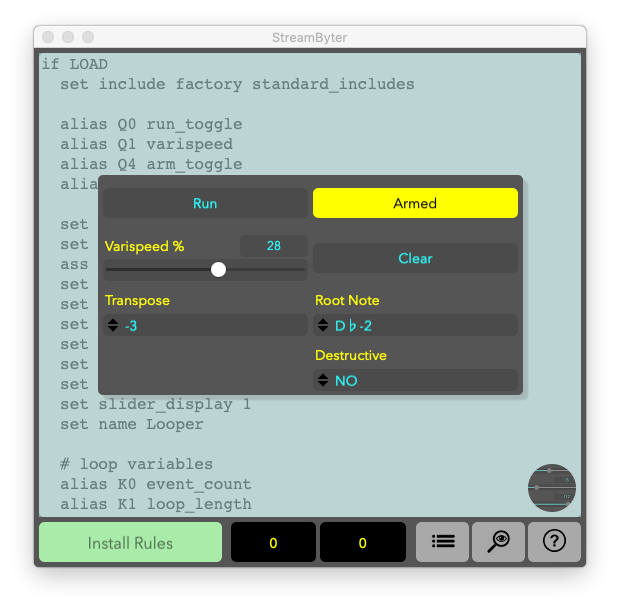 Secondly, there has been a major overhaul of the StreamByter language. You are no longer restricted to ‘assembler’ like opcodes and nasty UPPER capitalisation. All rules and flags now have long-form variants. Add to this the ability to give any variable a user defined alias, macros and parameterised subroutines and we’re starting to look a bit more like a modern programming language. By way of example, here is a chunk of code written in the new form:

Now, that would look like this in the traditional 'compact' form:

However, this is entirely backwards compatible so the old code will run perfectly fine in the new version and you now have the choice of concise+esoteric or long+modular.

Finally, I have gone to great lengths to provide some comprehensive materials for learning StreamByter - enter the ‘StreamByter University’ http://audeonic.boards.net/board/14/university (If Trump can do it, so can I), where you can peruse a series of articles from just getting started with StreamByter to advanced techniques. There is even a step by step tutorial on building your own custom MIDI channel switcher.

The full details of the new release (and there are many more new enhancements) are in the App Store ‘What’s New’ description: https://itunes.apple.com/us/app/streambyter/id1398712641?mt=8

I do hope you enjoy this new update. I hope to be able to announce some new drop’n’run scripts (that’s a hint above) very soon also.

PS. The new StreamByter is currently retrofitted back into MidiFire (along with some new features and some bug fixes) so some love coming there also. StreamByterAU for macOS should also be available this week too.