This is an overview of how we put our band Kerosene’s new album together, using Auria Pro, to edit, EQ, compress, mix, master etc.
I thought it might be a useful tip thread for anyone else undertaking such a task.
There may be some that don’t like certain methods that I’ve used, but we are all different, and it has worked for this album.
Please feel free to comment, add to or criticise the methods used, because that’s a great way of learning! 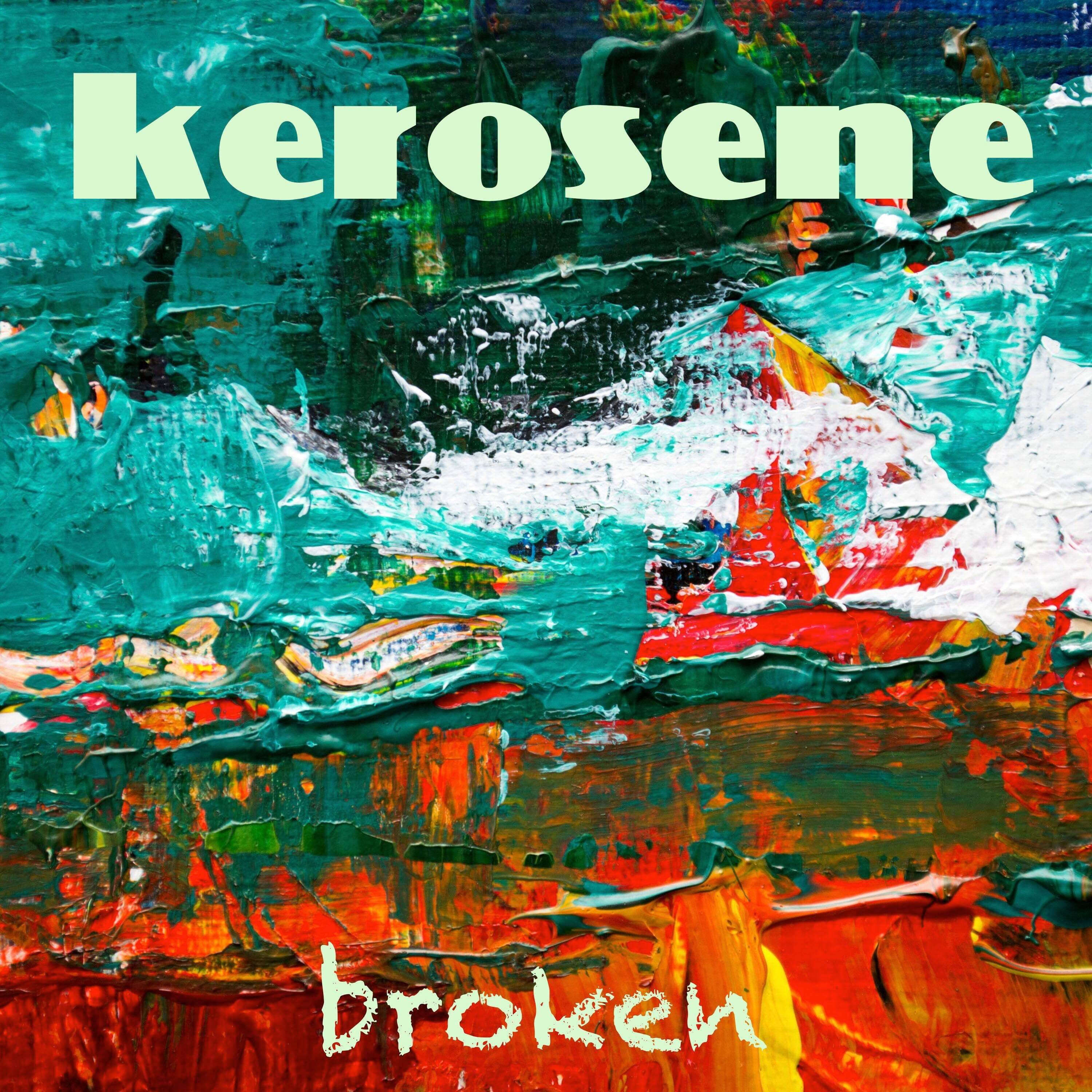 We started at a point, where we had narrowed down our songs to 12, that we loved and felt would work on the album.
The basic songs were recorded by us in various studios, and then mixed with a well balanced and clear sound. With time constraints and cost, we got the best we could for our limited resources!
We lived with these mixes and then decided what we could do to improve each song.

Every song had different elements that we wanted to improve. For example - Kicks or snares being louder or sharper, guitars made clearer and chunky, or vocals balanced or improved. We even decided to remove whole verses or choruses, shorten intros, breaks etc.

To this end, we did the rest via the magic of the internet. New overdubs, song edits, vocals etc., were all sent to me using .WAVs, via DropBox.

I created a template in Auria, 16 Stereo tracks. Anymore needed, could be added afterwards.
On the settings, I selected a buffer size of 4096 - the largest possible, as I was going to use a lot of FabFilter plug ins. There was no MIDI to worry about, as we were dealing with .WAVs only. The buffer size would have to be reduced to 512 or lower if there was any MIDI involved. 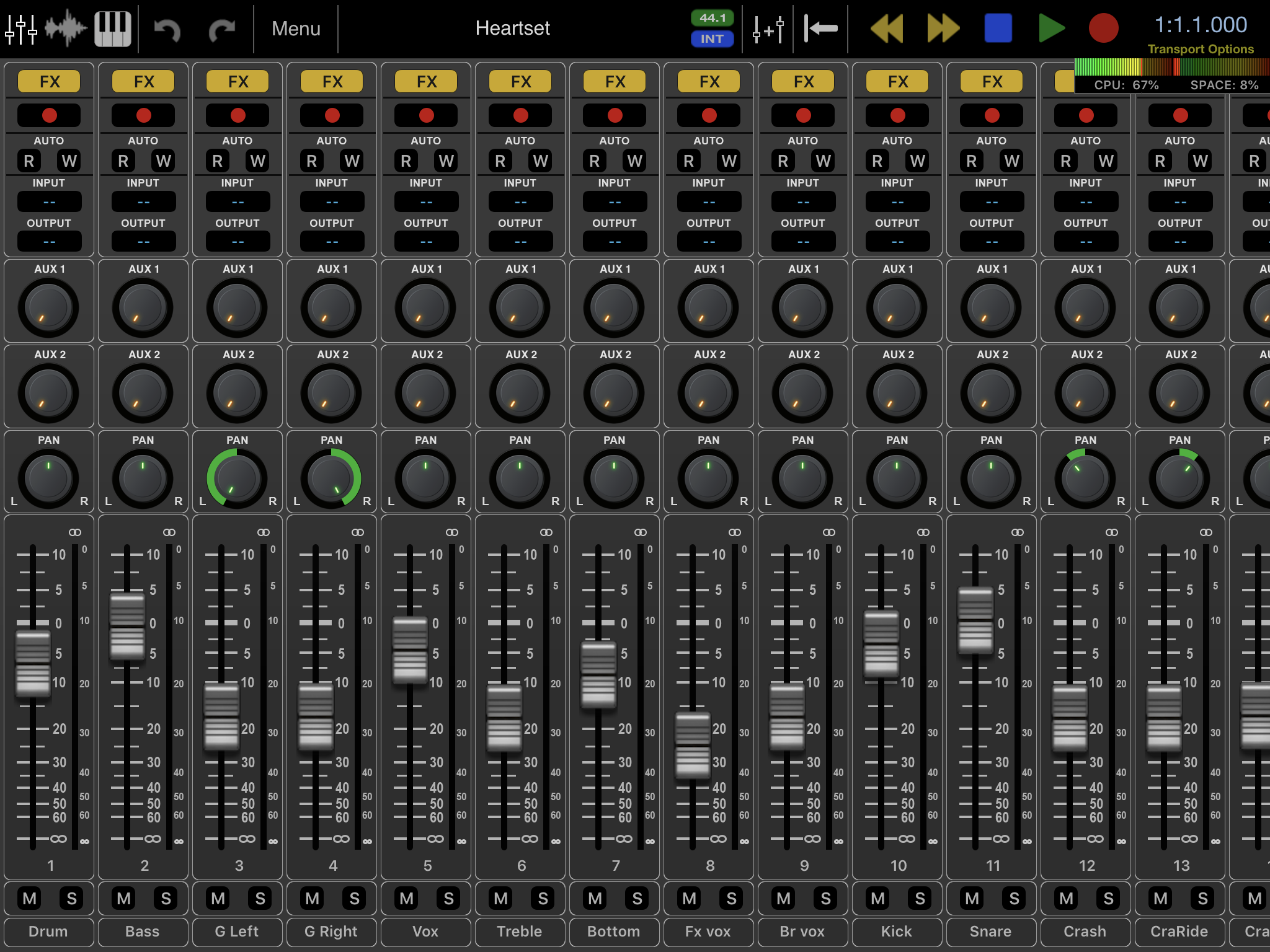 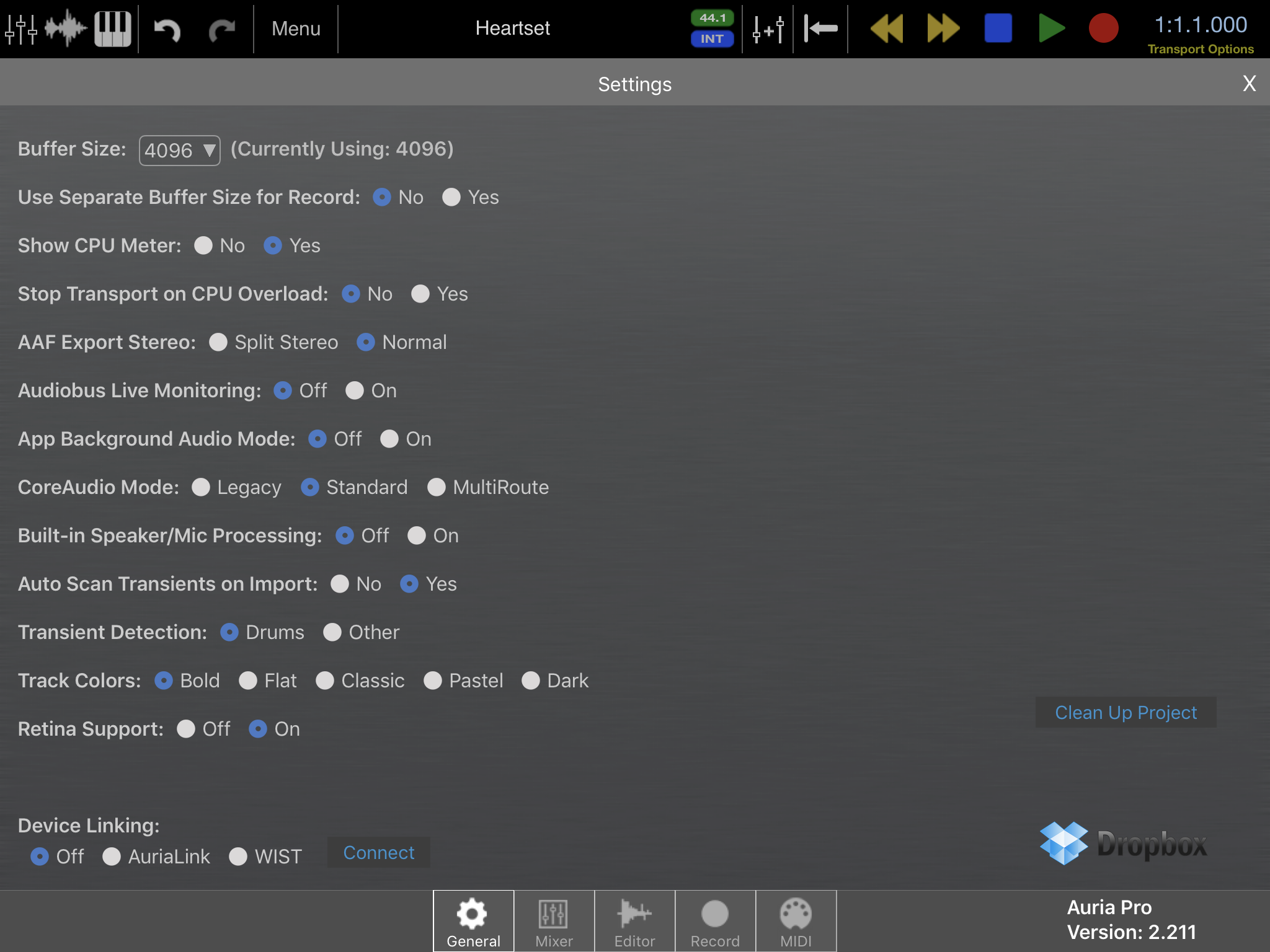 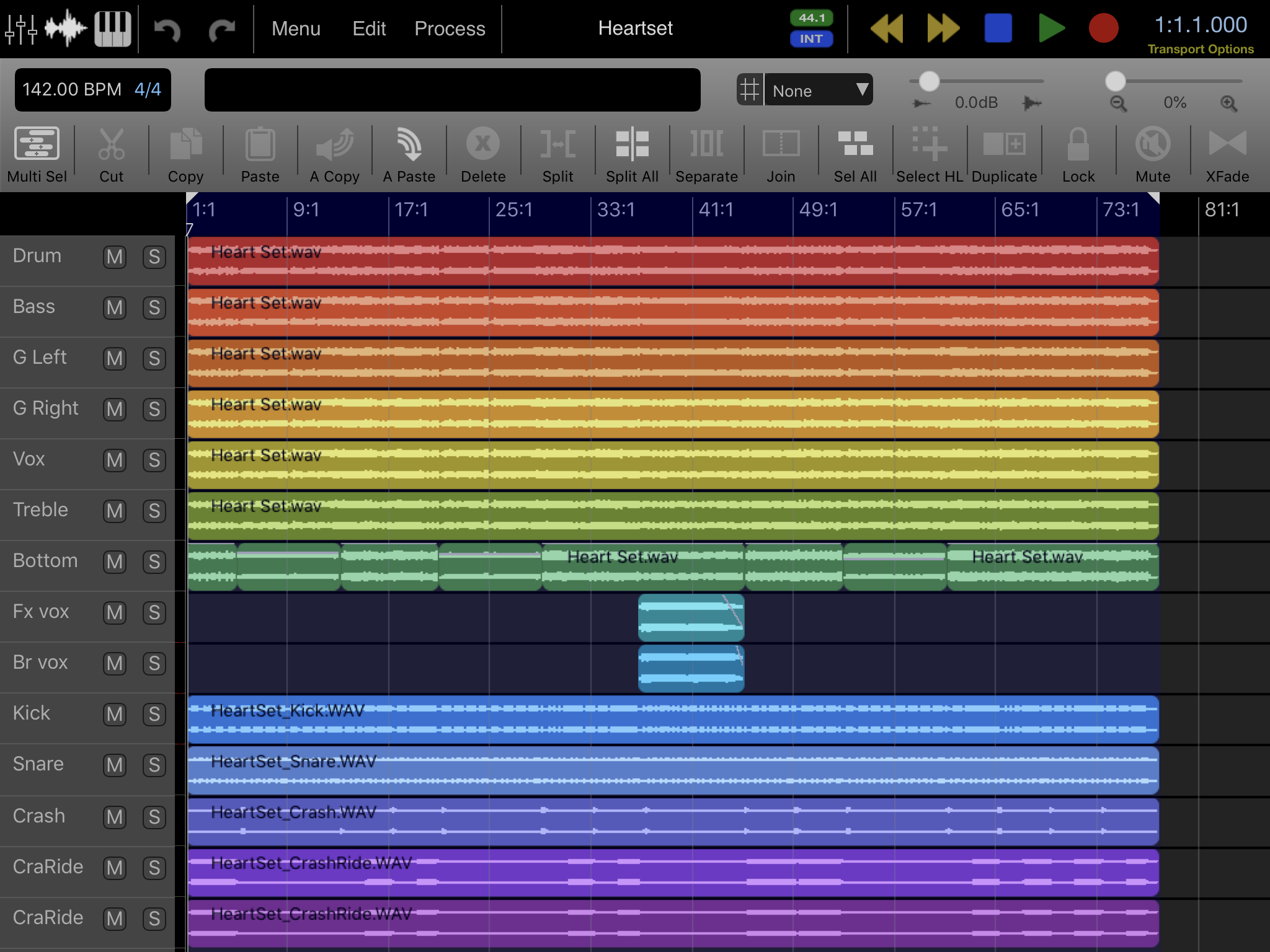 After setting the correct tempo and time signature (they are all 4/4, except for one 3/4 song), I imported the .WAV of the song to be used. The gain on this .WAV, then had to have gain reduction, so that it never peaked above 0 dB.
This .WAV, was then copied to other tracks, so that I could mix various elements - Drums, Bass, Guitars, Vocals, Bottom EQ and Treble EQ, for example.

Overdubs were then imported to other tracks. Kick, Snare, Percussion, Bass, Guitar, Vocals and any other additions.

For overdubbed drums, I used Drumagog, to replace or blend the original samples that had been DropBoxed to me. 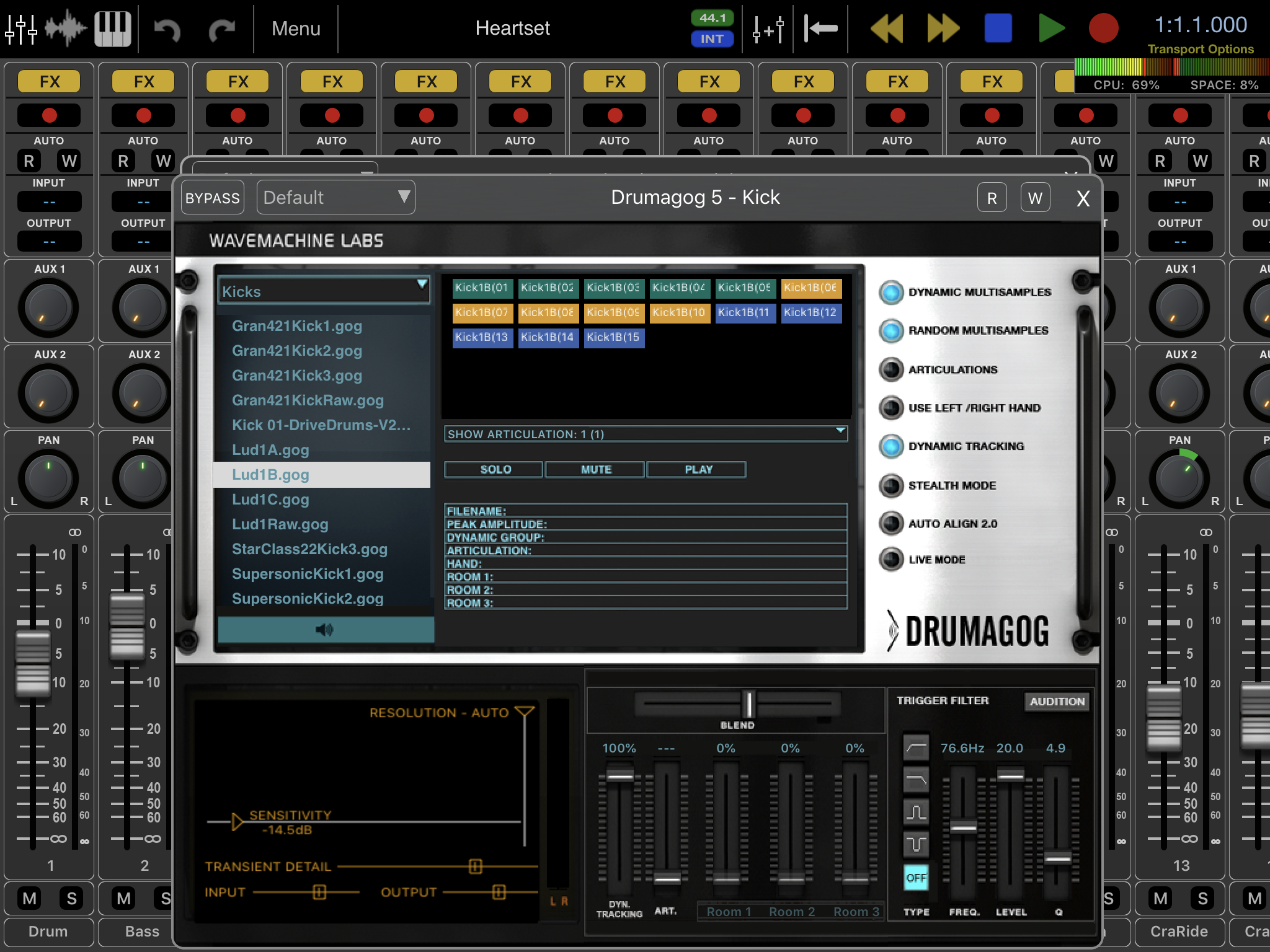 FabFilter plug ins were applied to each track and the PSP channel strip was used to gate, expand etc.
On the Insert channel strip, I put Pro Q2, Pro C2, Timeless or any other FX needed and Pro R.
All of these inserts had to be balanced on the output level, so that what was increased by gain, was decreased by the same amount on output. Got to keep that 0 dB ceiling! 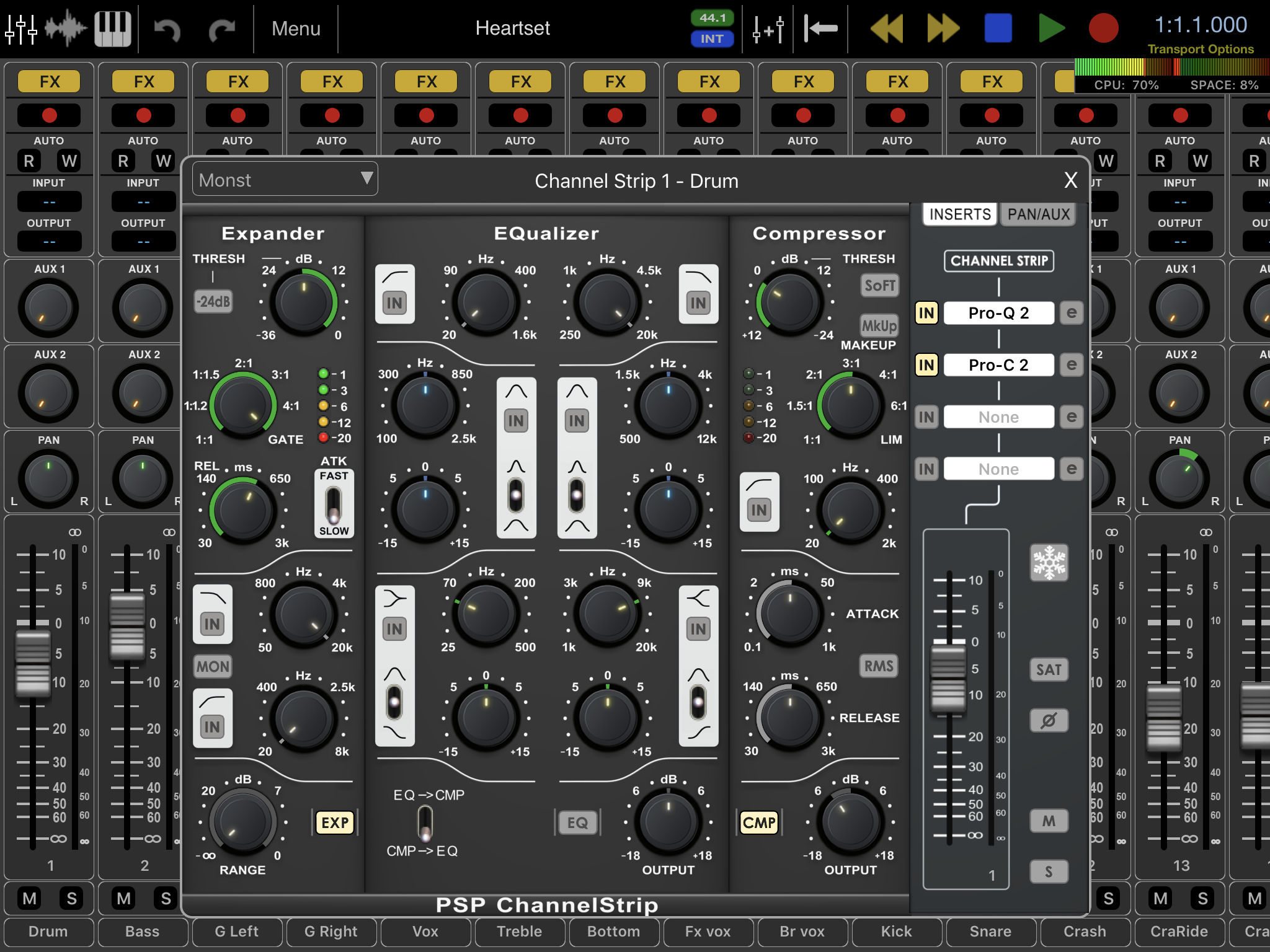 Different EQs, Compression, reverb etc., were used on each track, depending on what was needed.
For example, a sharper, more consistent Kick, more bottom end or more treble. 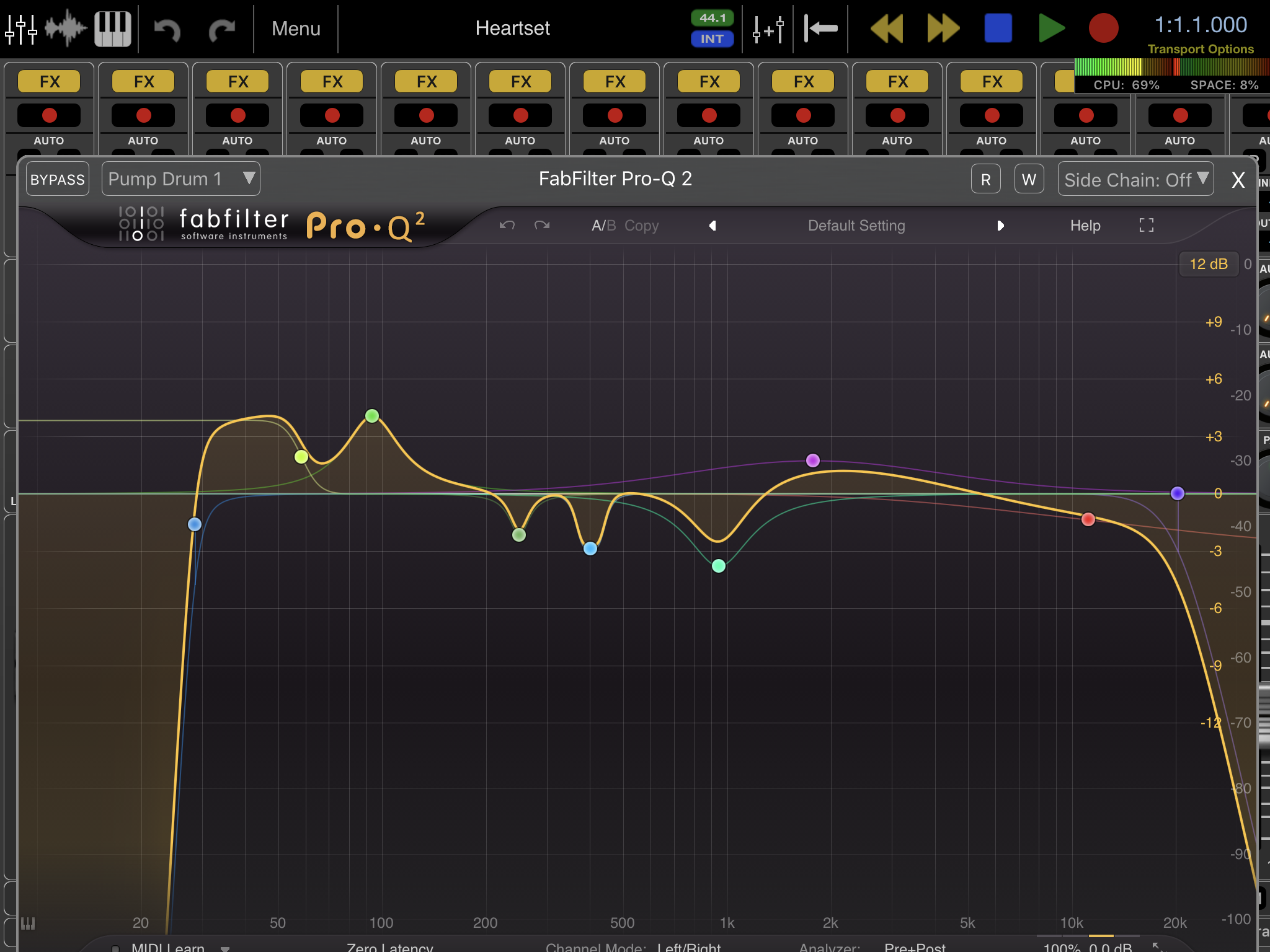 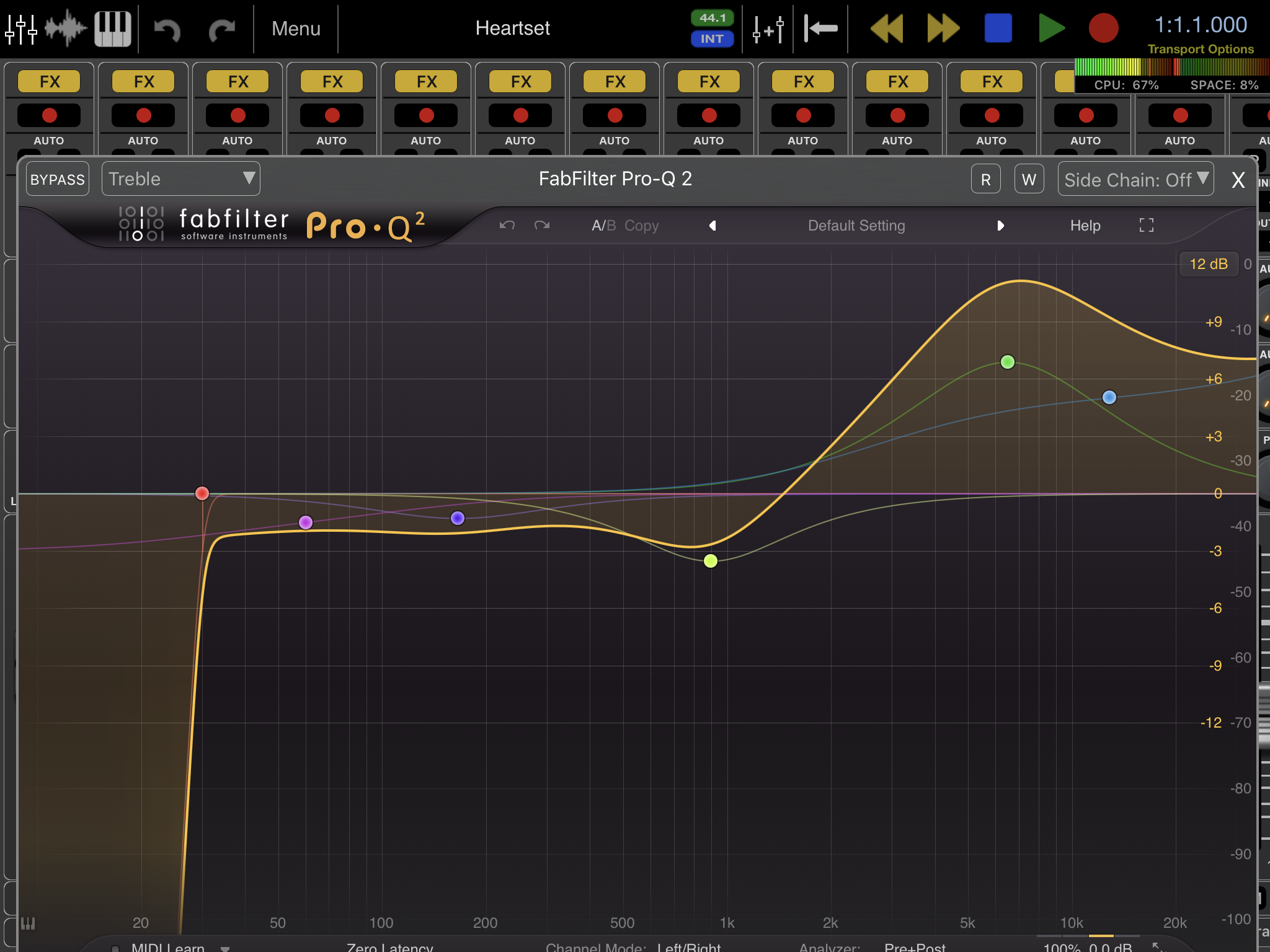 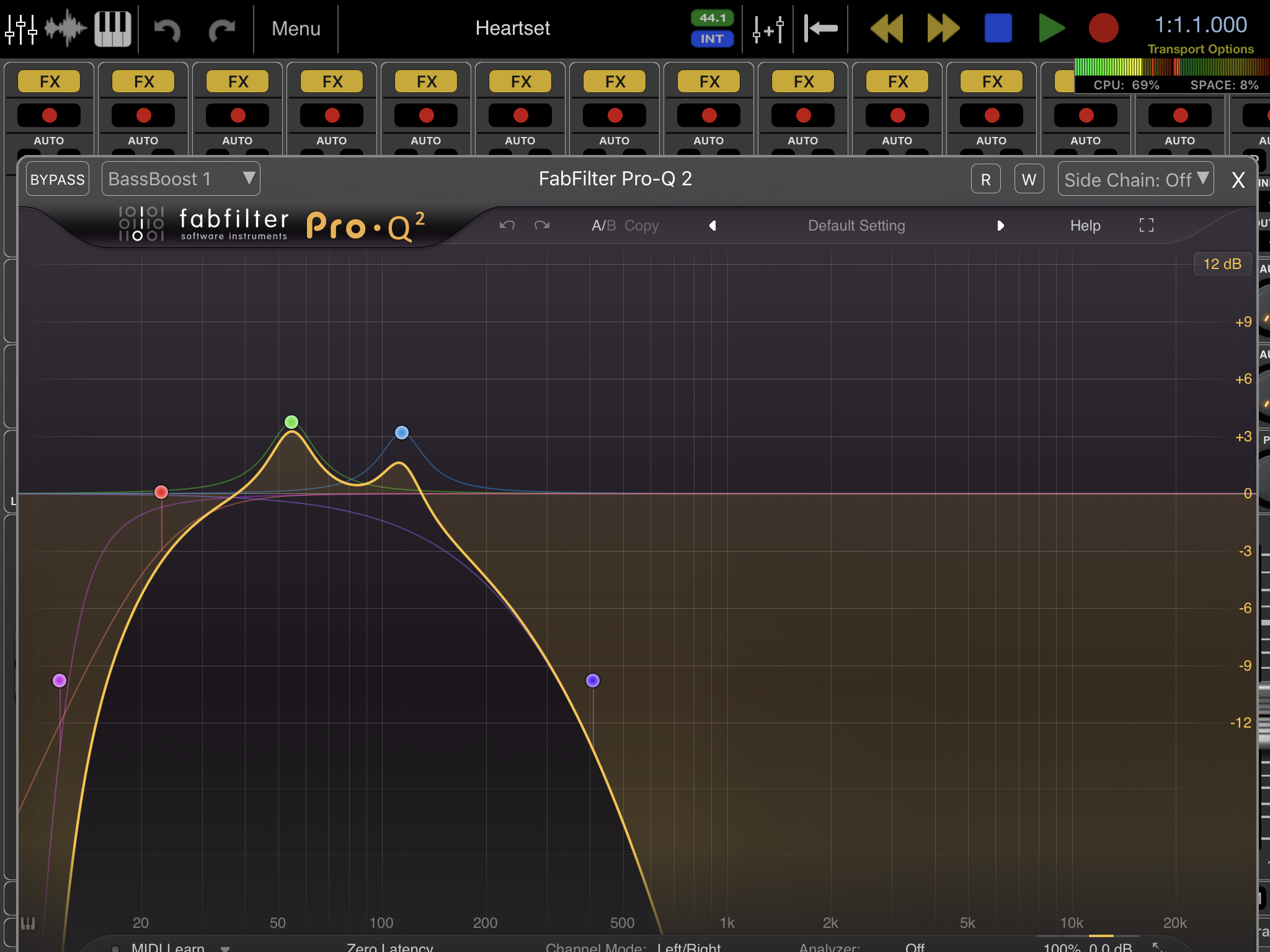 Once everything was well balanced mix wise, never peaking above 0 dB on the master fader, it was time to add Pro L2 for mastering. 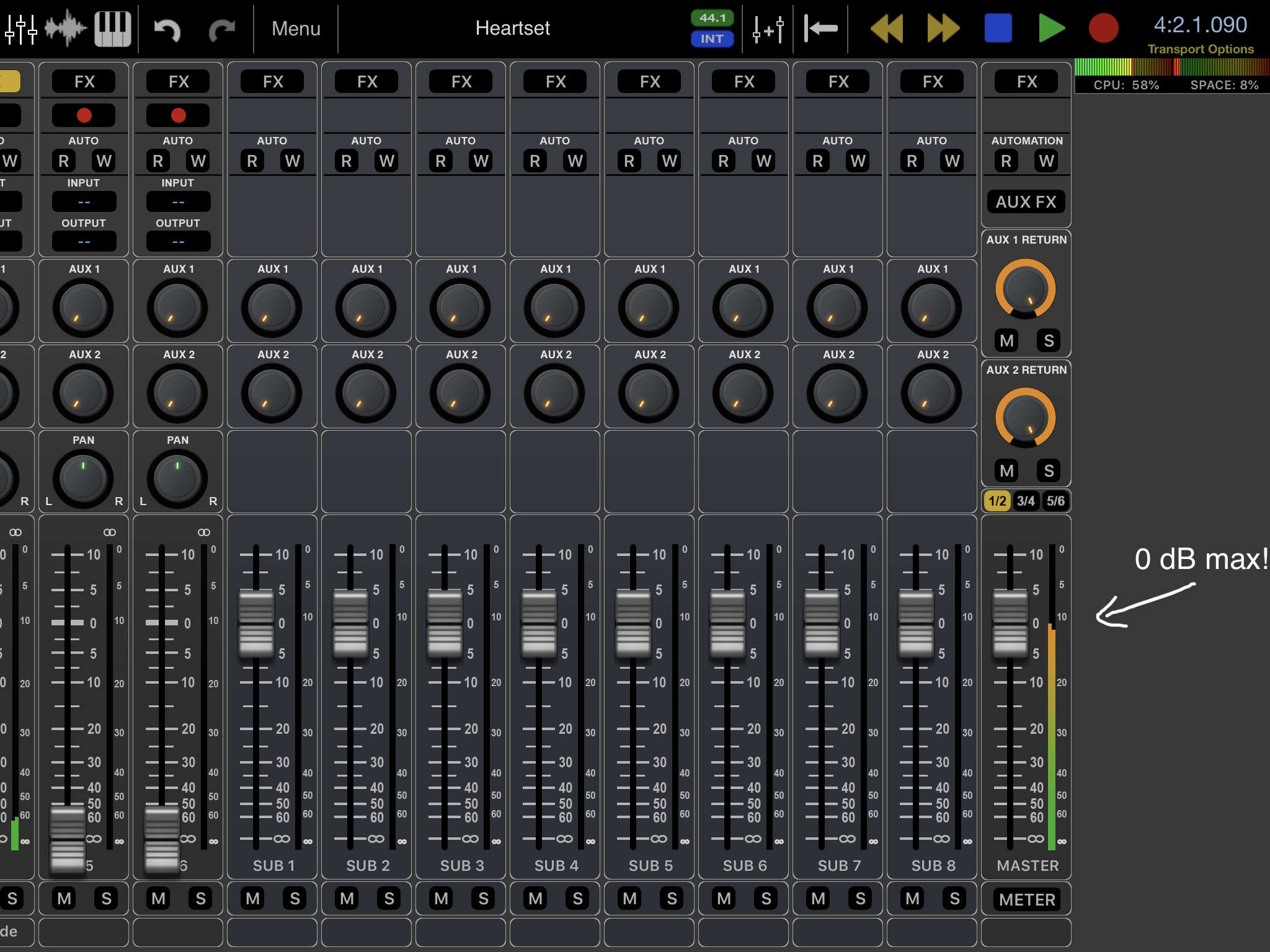 Using the LUFS Loudness setting as the mastering guide, I set the levels to an acceptable loudness.
Each song had different dynamics. This particular song ‘Heart Set’, was quite a punky pop song, so I could live with the meter going up to -10 LUFS occasionally. I know some people won’t like this fact!
I used the Hard Rock & Metal Punchy setting for this one. True Peak Limiting was on, 8 x Oversampling was on, 16 bit Dither was on, and I set the overall out level to -0.25 dB. 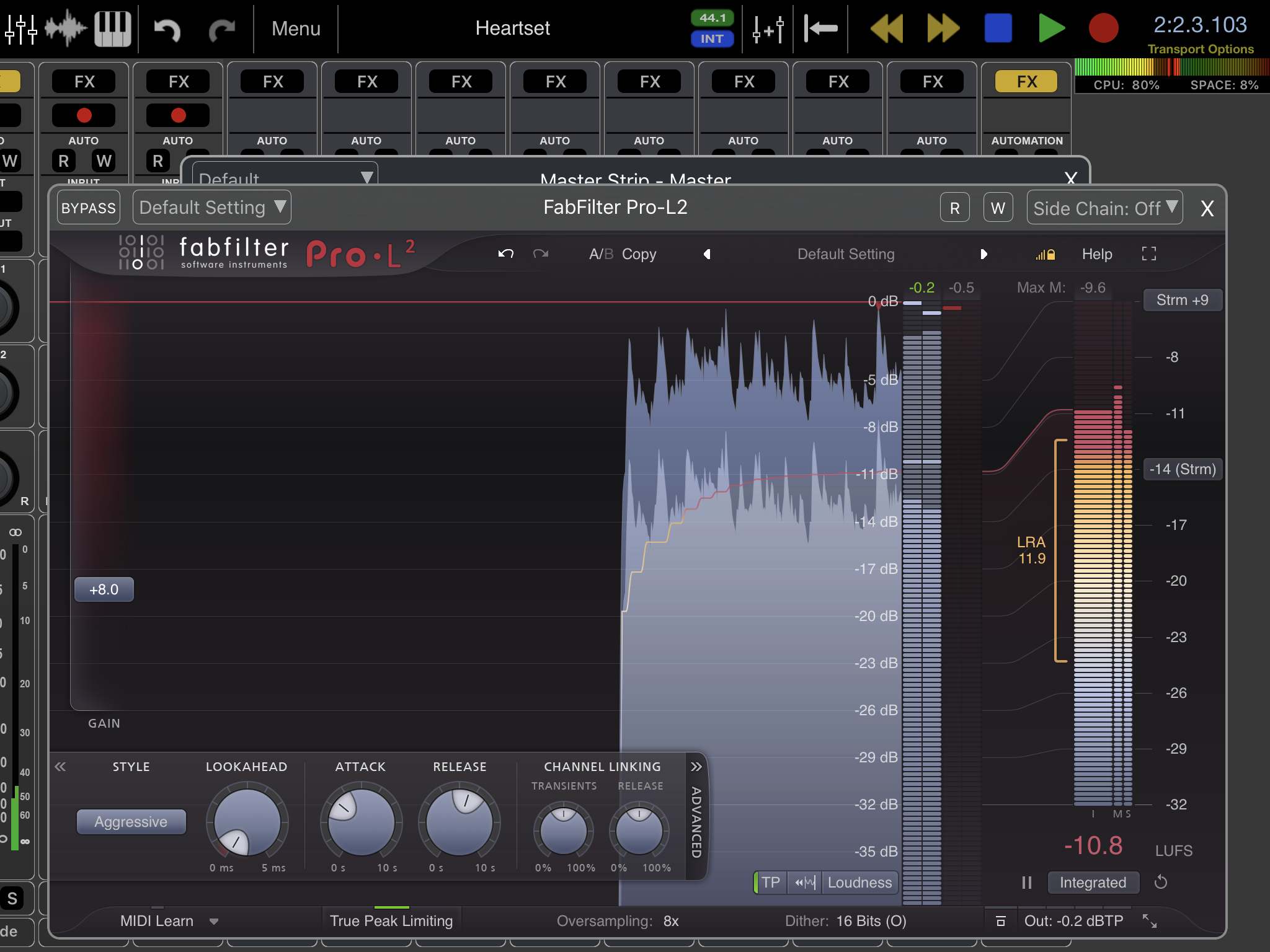 The song was then mixed down to AudioShare. 16 bits, stereo and within the Locator range for length of song. 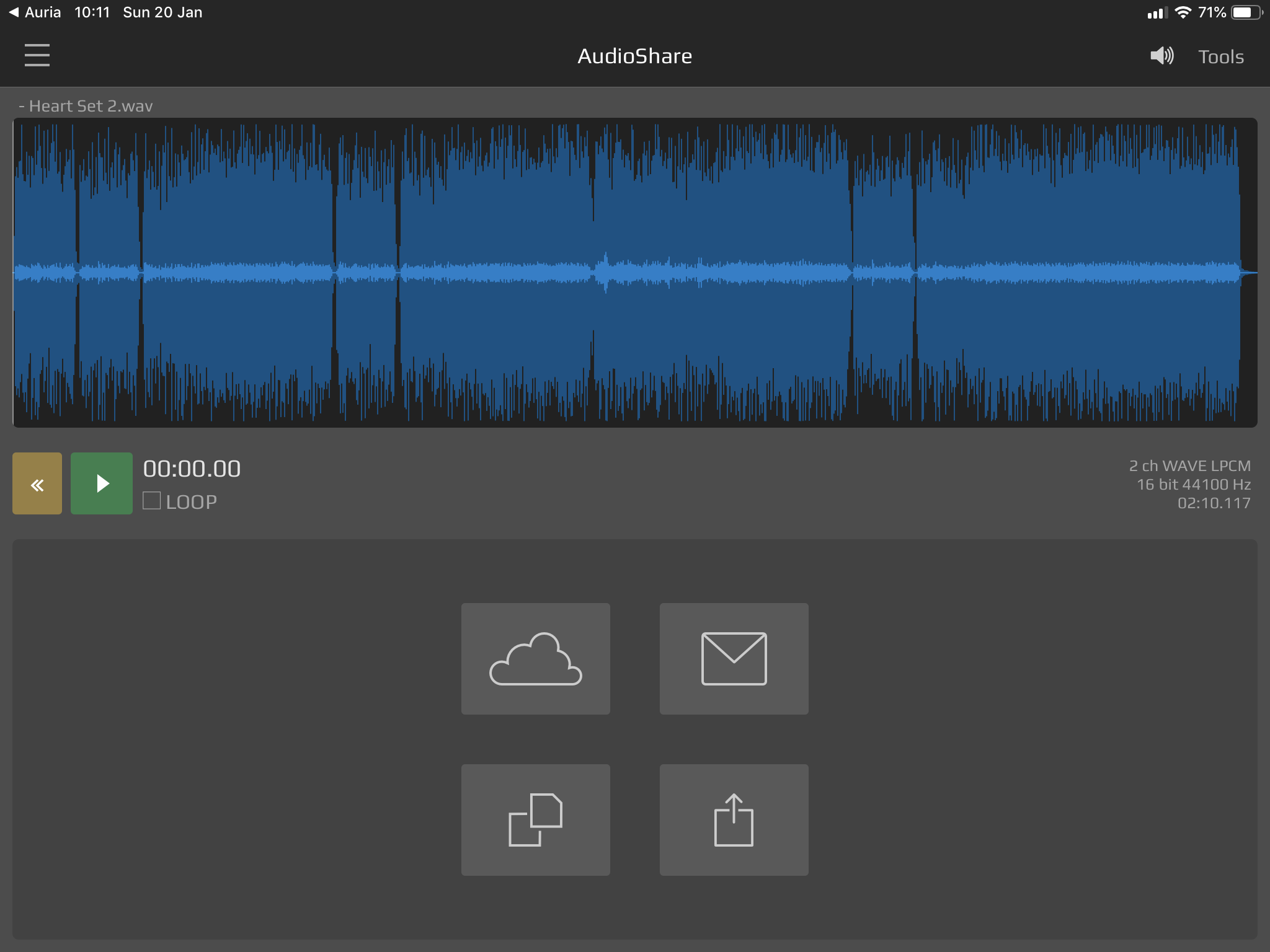 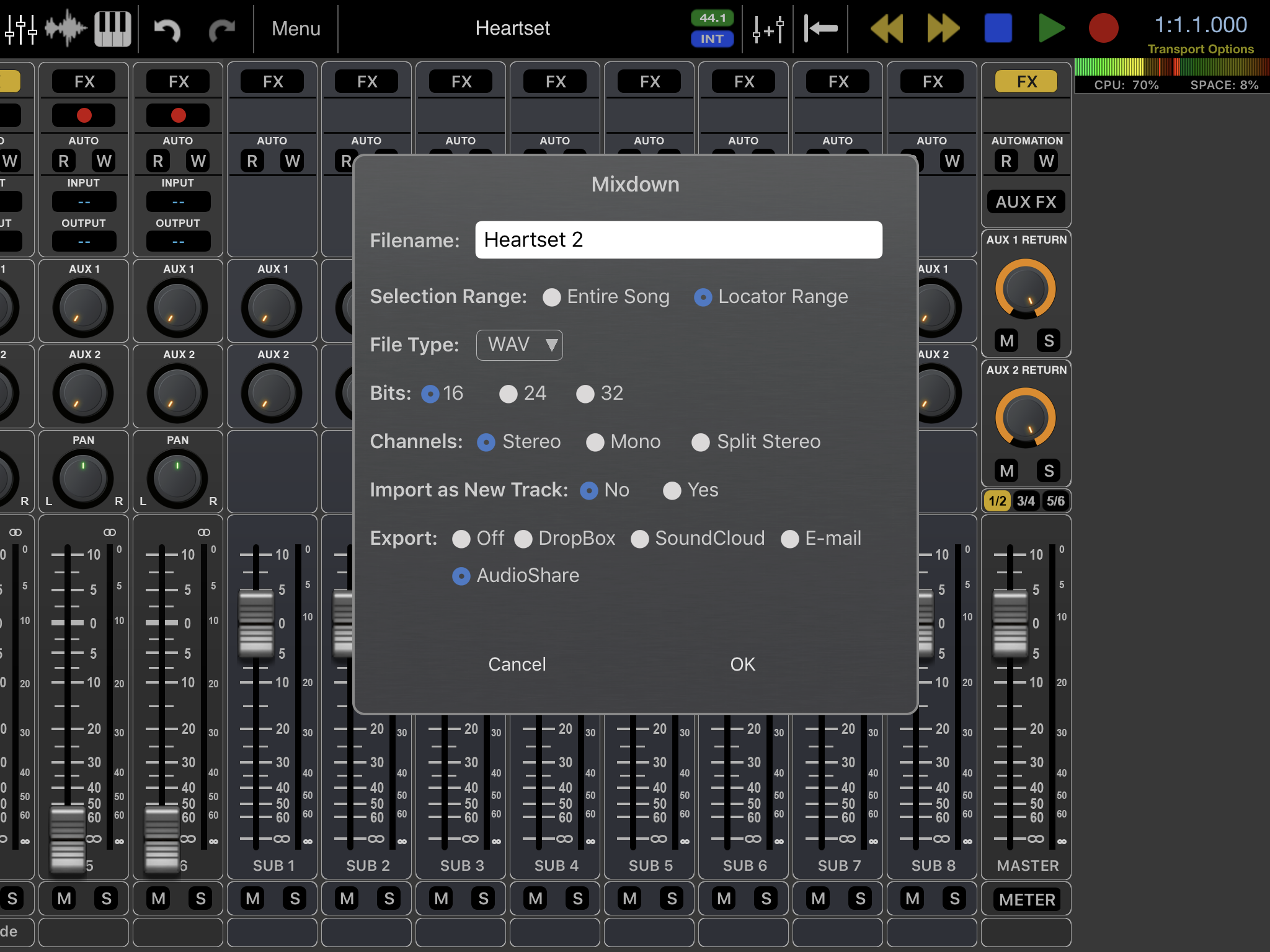 The mixdown was shared and tested on all sorts of listening devices, like, cheap earbuds, iPhone, iPad, expensive speakers, cheap speakers, and my favourite test - the car stereo!

Feedback was then given on what everyone was happy/unhappy with, what needed tweaking and overall sound.
These changes were then applied and then shared again, until we were all happy.
TaDa!
Album details, where to find and advertising spiel, to follow on next post!