Dreaming of a Polyend Tracker/Renoise-style app... 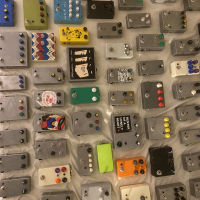 mambonassau
May 19 in General App Discussion

and, really, just posting to maybe wish it into the world. SunVox is a beast, but not optimized for iPad in any real way - it has a janky/cumbersome interface and workflow, particular re: its modular effects/engines and scattered menus. VividTracker also has interface/workflow issues, while Nanoloop and SidTracker64 are aimed firmly at the chiptune niche. Given the Polyend's popularity, a well-designed, equivalent, robust app tracker would probably be a must-buy for many of us - particularly those who grew up on D&B and Aphex records.

Bonus: Bluetooth QWERTY keyboards are cheap as chips and the iPad CCK works comfortably with the wired variants most of us already have, so controller buy-in would be minimal, as well.

I'm probably going to just drop $75 on Renoise for now, but the iPad really is my preferred platform for electronic stuff. If a Polyend killer arrived on the scene, I'd scoop it up. I assume I'm not alone here?