nerkovteky
November 2018 in Support and Feedback

My Apogee ONE usb mic will not connect to my iMac using High Sierra 10.13.6. It flashes on and off and tries to connect. Occasionally it connects and is stable for a while allowing me to record but then it disconnects again. It was working before I made the OS update to 10.13.6. Until recently, I had been using this mic to record in GarageBand for nearly a year on the iMac. I bought the iMac in January 2018 and recorded with GarageBand with no problems. I’ve been using this Apogee ONE for about 3 years on various Apple products.

On my iMac I have already gone into System Preferences > Security & Privacy and found Apogee blocked. I clicked to allow it so it is not blocked now.

I tried connecting 4 different usb cables from the ONE to the iMac but that did not correct the problem.

The Apogee ONE will connect to my MacBook Pro, High Sierra 10.13.1. I am able to record with GarageBand using both the mic and instrument inputs from the ONE.

The Apogee ONE will connect to my iPad Mini iOS 12.0. I am able to record with GarageBand using both the mic and instrument inputs from the ONE.

I once had a problem with recording to my iPad after an iOS update a couple of years ago. It took Apogee 6 months to find a solution to the Apple update. Since Apple recommends Apogee ONE as the usb mic to use with their products it would be helpful if the two could keep their products in sync.

There is one other new problem I’m having with the Apogee ONE. I am hearing a buzz/hum through the my headphones connected to the ONE when the AC adapter is plugged in. When I unplug the AC adapter the buzz/hum goes away. I plug it back in and the hum comes back. I hear it when recording on my MacBook and iPad but the buzz/hum is not recorded. I could record without hearing the hum if I just ran the ONE off batteries. It’s just annoying.

Incidentally, my wireless Magic Mouse 2 and wireless Apple keyboard started randomly disconnecting before I updated my OS. I updated to see if that problem would go away but it hasn’t. 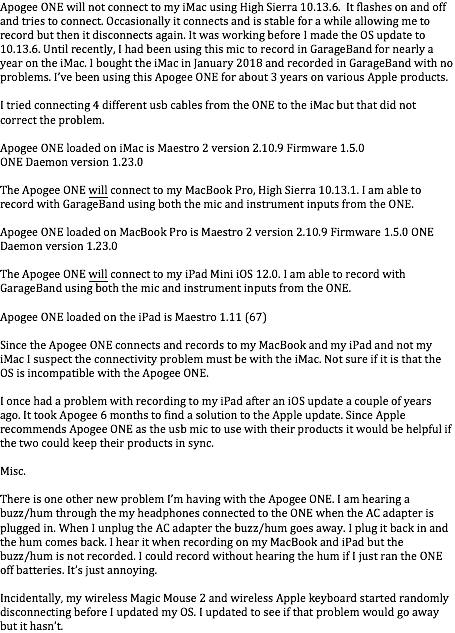