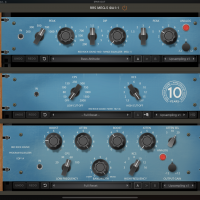 sinusedo is a microtonal sinewave synthesizer. It supports various Equal Division of the Octave (EDO) settings and per-key modulation