Can someone help me demystify MiRack/the intricate details of modular synthesis?

Okay, so I was originally going to post this in my other thread here.

But I've reached the point with this post that I decided to split it off into its own separate thread.

In short - I am utterly baffled and confused as to how to create modular synthesis with MiRack.

I'm not complaining about MiRack, as it's an amazing app. Rather, I want to learn how to use it to create generative music and drones.

A bit of background - I've studied basic modular synthesis in college and learned how to create a subtractive synth patch with the Arp 2500. (Not Arp 2600, Arp 2500. https://www.vintagesynth.com/arp/2500.php )

I've also had fun in SunVox, in Caustic with its modular synth, in Drambo, and in the predecessor app to Wotja (the name of which escapes me).

So I watched this video here... 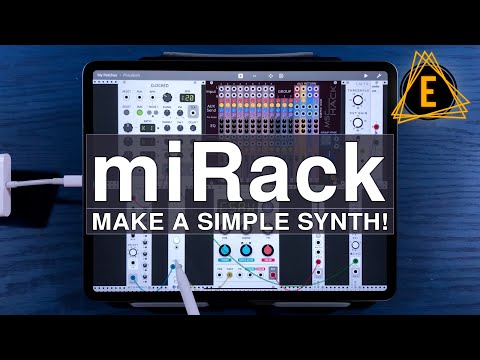 ...and I'm even more lost now than ever before. I can't for the life of me explain what isn't clicking with me. Maybe I don't understand what MIDI clocks do, or how the connections work in this particular modular environment. Or maybe it's intimidating to me? Or maybe the Arp 2500 was a good way to learn the bare bones basics of how modular synthesis works, but wasn't enough of a deep dive? (Then again, I never got on with Reaktor back when I had Komplete 4 or 5 or 6 back in 2007. So maybe that's what's throwing me for a loop.)

Does anyone know of any good resources, tutorial videos, and such that can demystify MiRack for me? Or on a more macro scale - the intricate details of modular synthesis I may not have learned in a shortform way an idiot like me can grasp and understand?