blackroosteraudio
May 2021 edited May 2021 in Market Place 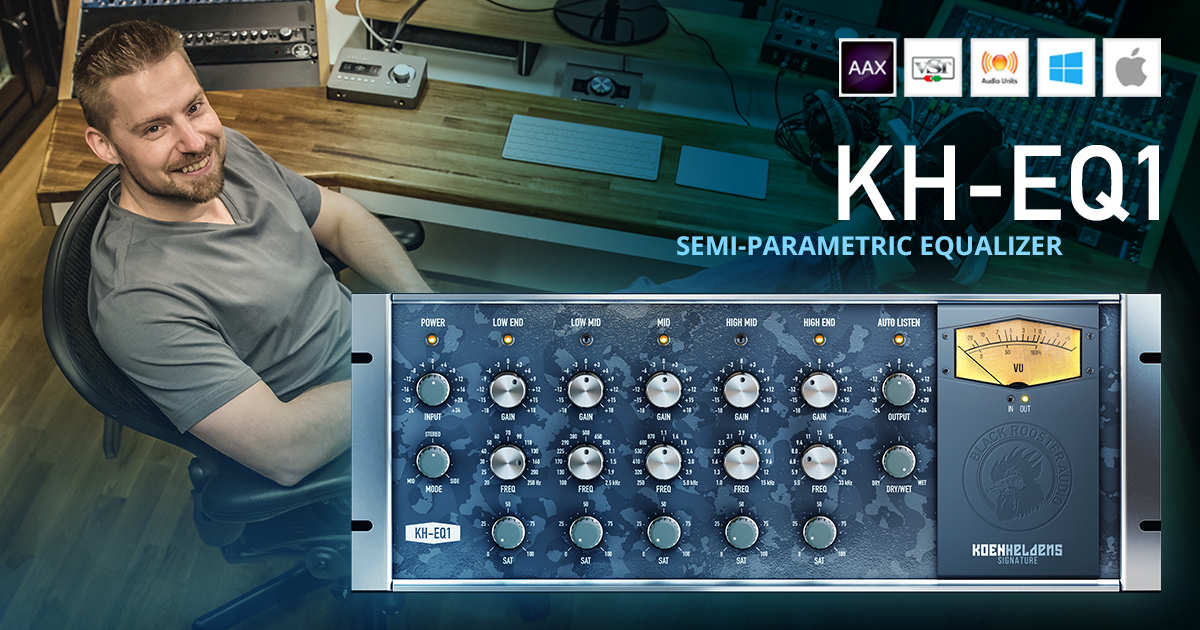 Take your productions to the next level with the help of one of the most knowledgeable producers and mix engineers of the moment with the KH-EQ1!

Not only does this original semi-parametric EQ allow for detailed sound shaping, but it also fuels your creative abilities due to its highly musical functionality.

The KH-EQ1 is a semi-parametric 5-band EQ like no other. It features rich-sounding frequency band controls that allow you to add color to each band while encouraging creative sound shaping with its highly musical functionality.

The KH-EQ1 - the second part of the Koen Heldens signature series - is a professional studio EQ with a twist, which features harmonic per-band saturation and our innovative, stepless Mid<->Stereo<->Side router.

Each license includes custom presets created by Koen himself, giving you the professional studio experience you’ve been waiting for.

It is the perfect addition to any producer’s arsenal, and it’s the ideal tool for adding richness and creativity to your productions!

PER-BAND SATURATION (HARMONIC DISTORTION)
Add richness to your sound by adding harmonic distortion to each individual frequency band using the saturation dials. This allows for complete control over the distortion without compromising all other frequency bands - perfect for adding that authentic-sounding analog vibe to your productions!

AUTO LISTEN FUNCTION FOR PRECISE FREQUENCY SELECTION
With the Auto Listen function, the gain control automatically solos the changes applied to each band. This makes it much easier to stay in control during your EQing process.

INNOVATIVE MID<>STEREO<>SIDE ROUTER
This function allows for M/S cascades or surgical stereo equalization. The stereo input signal is decoded to the middle and side with the possibility of blending them with the original stereo input via the stepless control.

The KH-EQ1 is the second part of the Koen Heldens Signature Series, following in the footsteps of the KH-COMP1 Signature Compressor, that has been vowed both by our valued customers and press. Koen Heldens is a multi-platinum selling, American Music Award, and Billboard Music Award-winning mixing engineer and producer, best known for working on the most streamed song in 24 hours with XXXTentacion, among other prominent names in the music industry, such as Trippie Redd, Missy Elliott, and Timbaland.

Koen is the expert when it comes to producing some of the best and most-streamed albums in the hip-hop genre - and while his experience and understanding of music production allow him to create and shape the emotional foundation of a song, he also has a deep understanding of the technical aspects and limitations of each plug-in he holds in his arsenal.

The collaboration between Koen and Black Rooster Audio quickly evolved into a fruitful creative partnership, resulting in a one-of-a-kind plug-in series that is up to the standards of one of the greatest producers of the moment. We are proud to have Koen use our plug-ins extensively in every mix and to have co-created this Signature Series with him.