Where to place our shiny new compressor/equalizers in the signal chain? 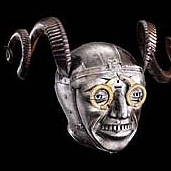 Like dozens of forum members I purchased Magic Death Eye, 6144, and a couple of others in the past days. Now comes the hard part: signal-chain positioning. As a guitarist (primarily) I would have placed the compressor and EQ before the amp — but these aren't didly little stomp boxes.

So, are these new toys fine there, or should they be relocated to a different signal-chain address (or should the EQ be placed before the compressor?)

Also interest in the same for keyboards/synths...