Drambo FX - Is it possible to send audio to another instance? 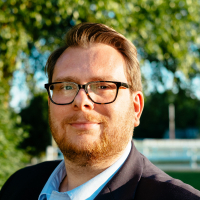 I'd like to use drambo the same way that Roughrider 3's external sidechain works. In my mind, I see a Drambo FX instance that takes the audio input and routes it to a multibus output. Then I add another Drambo FX instance on a second channel that takes the input from that multibus output and can use it to drive compression. I can't figure out a way to do this. Am I trying something impossible?