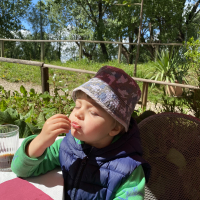 Charlesalbert
October 2020 in Support and Feedback

Hello guys, don’t kill me as I know that it was discussed before.

I have an IPad Pro with locked sample rates at 48000Hz. I always used this with Apple usb c adapter and in AUM I was always able to switch from 48000 hz to 44100 hz in order to use some apps that are crackling at 48000hz (cs grain and spectral for example).

I generally use a sennheiser headphone (momentum) with mic and I can always switch sample rates in aum, but now I’ve bought Audio Technica ATH-M50X which has no mic and I can not chance Sample rate anymore using Apple dongle.

Is because of the mic absence? Are there some workarounds? @Samu i know you are an expert about this.

I have also an external audio interface zoom u 22 and I can change sample rates with it, but with the new headphone i hear a lot of static sound in the background when not playing, is this normal? Would you like to suggest me another compact usb external audio card to avoid this hiss sounds?