Ok this is really bizarre, so I have a handful of hardware synths plugged into my Presonus Studiolive 32r digital mixer, the main outs of the mixer plugged into an Apogee Duet interface, and the interfaces USB midi plugged into a Novation SL64mkII keyboard. The problem is crackles when recording my Waldorf Blofeld synth into Cubasis 3. In the below video I do an audio recording test in Auria, Cubasis 2, and Cubasis 3. In each one I first play the passage without doing anything, then I hit record, then I play it back. In Auria and Cubasis 2 everything is fine, in Cubasis 3 everything is fine until I hit record .. then it crackles badly. This does not happen to my other hardware synths all running through the same mixer which include three Moog Mother 32’s, Minitaur, and Voyager, Roland Jupiter 80 and JV1080, Korg MS20, Waldorf Streichfett, Behringer DM12 and DM12D. Why on earth would this happen only with the Blofeld, and then only when the Cubasis 3 transport is started (it crackles too if I just hit the play button with an empty track and play notes) Really weird, any ideas? 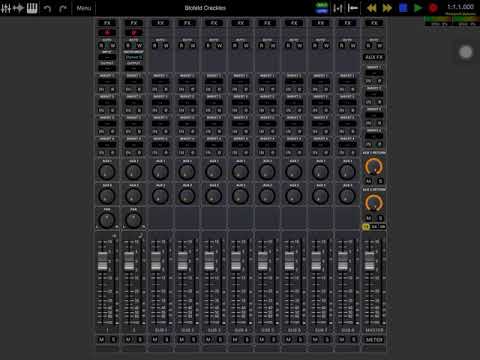