I wanted to share this little thing I’ve been working on.

Conceptually I’ve been working on this for like 2 years… The idea to be able to have a custom, performance oriented (this is a key point… I want to “play” it… I don’t want a DAW… I don’t want to “work on a track”... I want to make this is a real-time and in-the-moment as possible with 100% control) interface to allow me to sculpt audio in real time and “follow” the flow wherever it goes. I’ve tried pure hardware, PC/DAW’s, etc. etc. and while all of those have a place, I’ve settled on the iPad because it’s the most portable, accessible, etc. After all, the best tool is the one you have.

I also wanted to make it as “analog” feeling as possible. With a throw-back sense of tape-based workflows, analog grit, happy accidents, etc. I didn’t really want the glitchy type of remix effects, or the overly digital sounding stuff you can get with tools like Turnado (although I LOVE Turnado!!!).

So I’ve been building AUM setups and trying all kinds of hardware midi interfaces, and Midi Designer Pro layouts that allow me to do everything I want, in one view. I’ve gone through close to a hundred AUM/MDP iterations to get here and spent WAY too much money on a huge range of FX apps to arrive at a place where I feel like I’ve landed on something I’m happy (enough) with to stop developing and start actually using.

The main reasons I settled on the apps/AUs I’m using:
I like the way they sound or work
The midi/au.param map really well
They are stable! So many apps I love are crap in terms of stability…

This setup allow me to control pretty much everything I want at a “macro” level, and avoids th epitfall I fell into so often in the past of trying to control everything and ending up with a design that spanned multiplet pages and requires a fine tip stylus to use! At one point I had a setup I called the Enotron that was a built of 8 fx tracks that coudl feedback on each other, or themselves. It was awesome! But almost impossible to use…

Anyway… My final “shake down” testing of the setup I’m using for now resulted in this “album.”

** Note The above kinda looks like a single track here, but there's 9 tracks with drums and 9 "clean tracks" in the playlist... soundcloud.com/drumunkey/sets/the-enoloops - Stupid forum keeps turning link into a single track...

It’s a kinda crazy experimental piece based on (both conceptually and content-wise) a Brian Eno lecture I found on YouTube. I grabbed some loops from it, channeled a bit of Robert Reich, and went to town.

Obviously the source material was stupidly low fidelity being from a crap recording of a 1979 (40 damn years ago!!!) lecture.

Each track is kind of focused on various features of my control surface and the setup: looping in front of the fx bus, looping after the fx bus, various delay, EQ, tape fx, etc. The stuff he’s talking about in each clip kinda acted as a guide in some cases on what part I played with.

I then did another pass with the munged loops playing in real time and then added a layer of some basic drums/beats to provide a bit of “scaffolding” to the pieces. (I’m also providing the non-drummed loops in case you want to play with them). Some of them came out kinda cool I think… As long as you’re not looking for a tune you can hum.

While the “music” (noise/sound?) gets nuts, the key thing for me is it’s always 100% in control. I can control it down to very fine levels of detail, all from one interface. No app swapping!

Another bonus, is thanks to BT Midi, I can have my “mixing console” on an ancient iPad 2 running MDP and have a modern Air 2 run AUM with all the fx and synths.

Here’s how it looks in MDP: 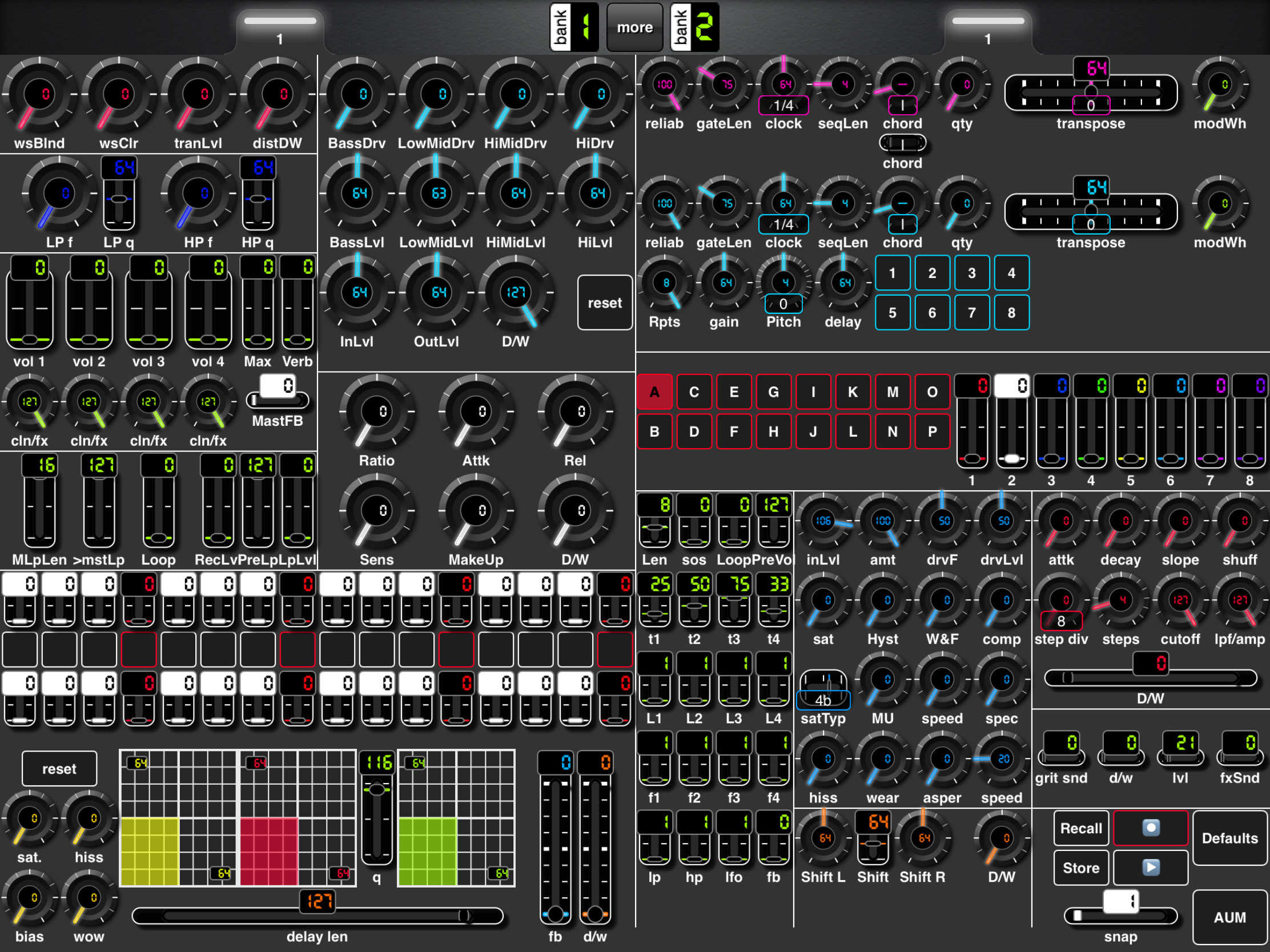 Here’s a little annotated view that give an idea of what each section is controlling: 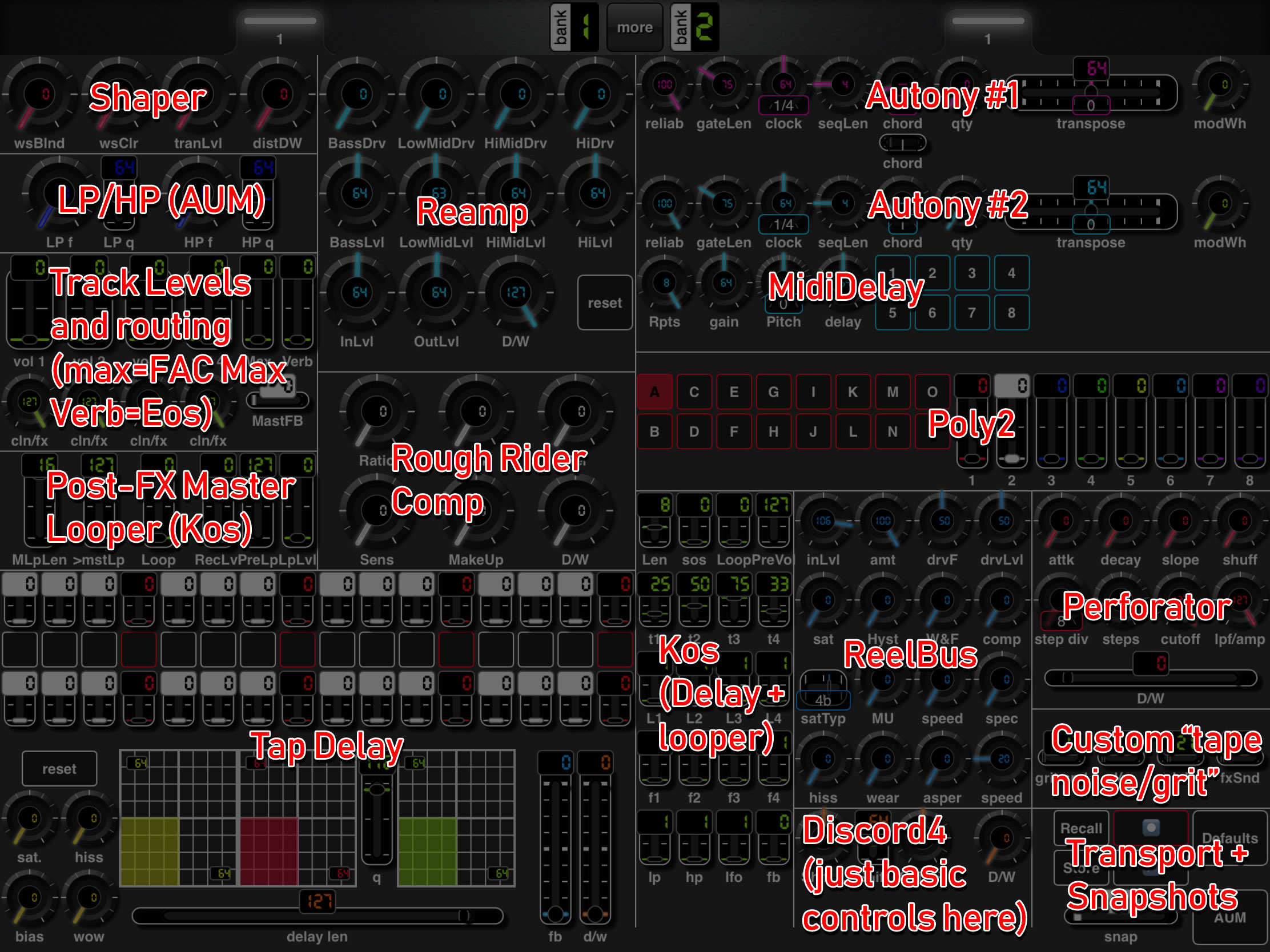 One REALLY cool thing about this approach and why I ended up going away from a hardware based setup is that I can have “snap shots” of all the settings… so I can mix to a point, save a snapshot, then do a build up or break-down and then recall a snapshot to bring the track/performance back. It’s insanely fun!

I’ll be posting more “jams” I come up with. Hopefully they will be a bit more “musical” in the future!

Any questions, let me know. I’d be happy to help people trying to do something similar.