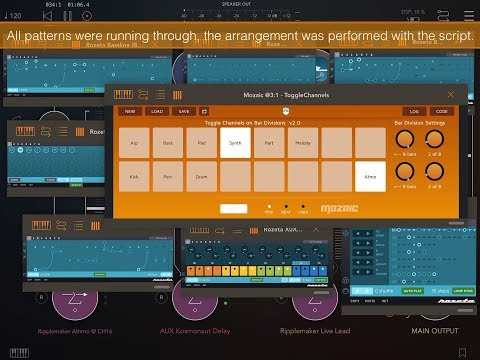 Usage:
You can setup pad labels when the host is stopped using the shift button. When host play is started, the inititally lit channels will be playing. Pressing a pad queues a toggle of that channel to the next bar division currently dialed in with the knob right of the pads. In that way the toggles keep in sync with the generators that are repeating every 1/2/4/8/16 bars.

The current subdivisions are visualized by the stepping of the knobs on the right. In addition you can configure pad-flashing to show the current position in the 16th grid on HELP view.

Prerequirements:
* Input midi generators fed to the script need to send on different midi output channels
* Instruments fed by the script need use midi input filters to listen only to a specific channel
* See Midi routing for multi midi input processing plugins on the wiki