Haven't had a chance to really dive in to these, but they sound great so far!

One interesting thing that I haven't seen in other AU's (does this exist in other apps?): In AUM and Audiobus's MIDI Control panels, instead of having every AU parameter in a giant, unwieldy list, the parameters are grouped according to function. E.g. instead of just "Spectrum" and then a list of 100+ parameters, you have: Main, Modulation, Env, Amp, Matrix, Settings; with the relevant parameters inside their sections.

In Audiobus this works great, everything is still a big list, but broken into sections for easier navigation. 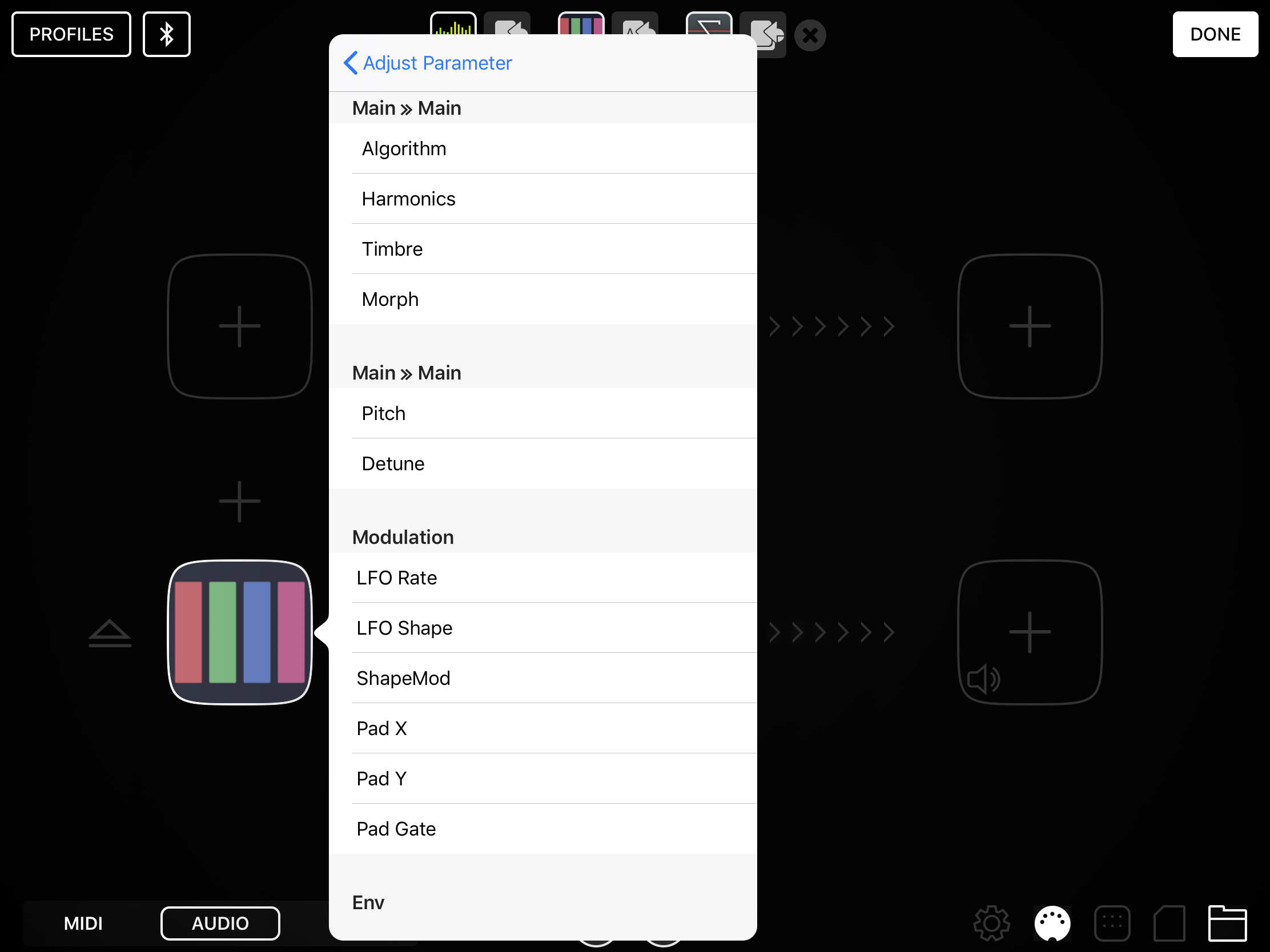 In AUM this results in a hierarchical menu system; each section drops down to a lower level. 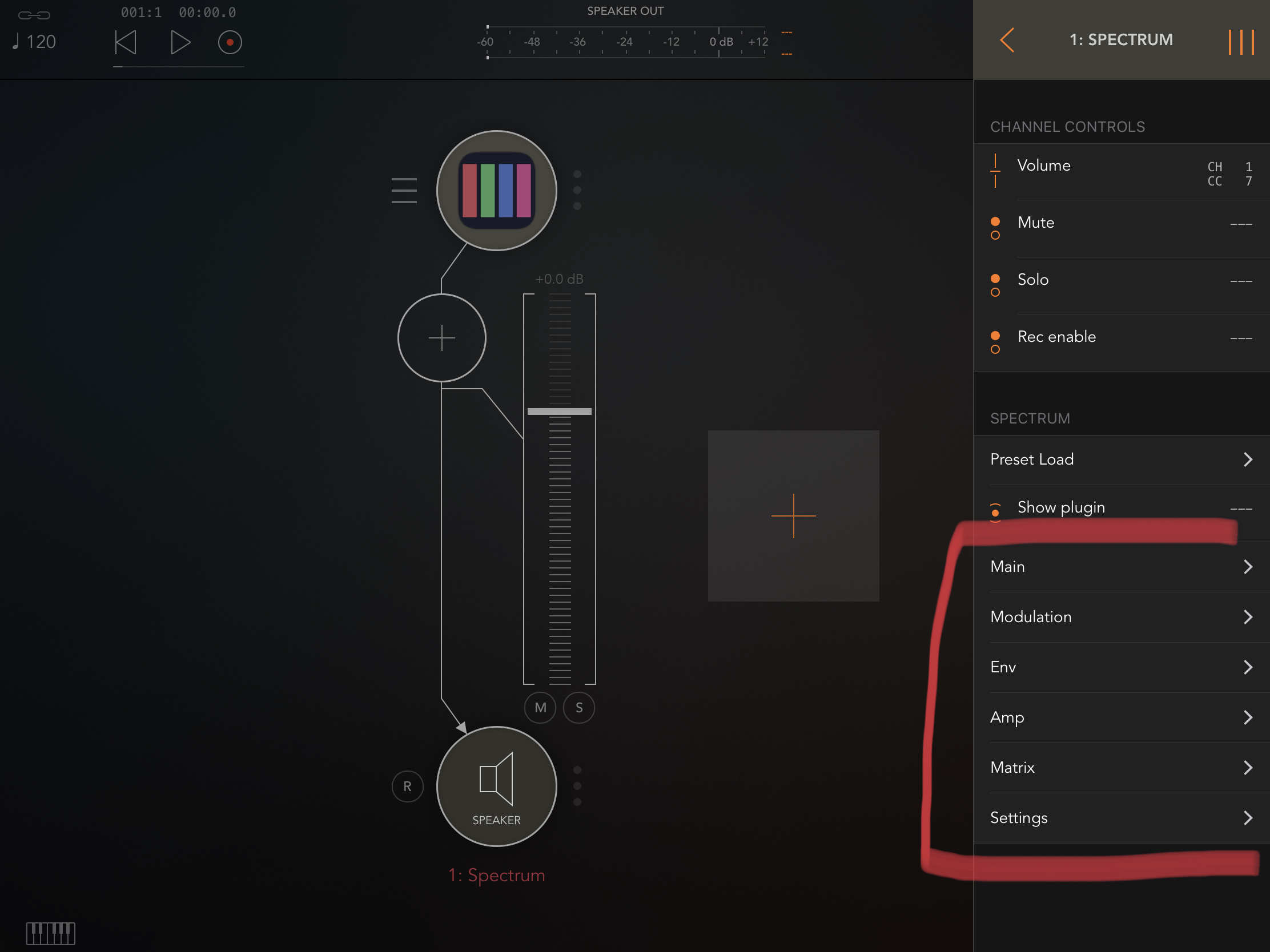 Since I prefer to run AUs in AUM because I prefer the multi-windowed approach of AUM to the single panel approach of Audiobus, I'm not quite certain how I feel about this.

On the one hand it still makes tracking down a new parameter easier, as you can follow the logical hierarchy. Want to assign MIDI control to the envelope release? Go to Env, then select release, instead of scrolling through a list of 100+ parameters.

On the other hand, after you're familiar with where the parameters are, and when you want to tweak amounts and scaling, it can be more cumbersome to have to keep diving into sub pages. It reminds me of Mitosynth: a great synth that I never use because the constant, hierarchical menu-diving makes it cumbersome to program.

Additionally, this adds to a frustration I have with all hosts: If you set up a complex series of routings with multiple AUs and then come back to that session later, when you've forgotten the specific routings, it's incredibly tedious to reverse engineer what's been set up, as well as just making a bunch of quick edits to the values. I wish that hosts could have an "Assigned routings" page that would show every assigned parameter from every app on one page; sort of like the "fold notes" feature you often see in piano roll editors, but listing all apps together.

BTW, apeMatix just shows a single list. This is unfortunate as things like the Matrix in Spectrum just show up as a repeating list of "Input 1", "Input 2" "Depth" and "Out" with no easy way to see which Rule you're setting. This is especially unfortunate as the modulation capabilities of apeMatrix make it perfect for hosting these Eurorack clones!

Things to hope for:
-All hosts to have an "Assigned Routings" page!
-Audiobus to have multi-AU-window capabilities
-AUM have the ability to display parameter grouping as list headings like Audiobus instead of sub-pages
-apeMatrix to show the groupings at all!
-Spectrum, perhaps a way to toggle the listing from grouped to flat?

@burns_audio BTW, the groupings could probably be "tightened up" a bit. E.g. in Spectrum, there's a "Main" master group, that has two "Main" sub-groups that in turn have the actual parameters. The sub-groups are probably unnecessary. In Modal and Resonator several parameters have two higher levels when there's no choice; e.g. Resonator/Resonator/then the resonator parameters.