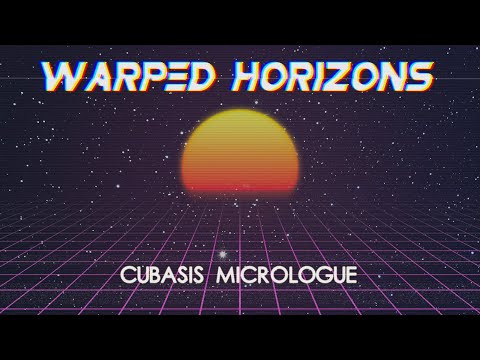 Recently, I have been using my iPad and K-Board combo as a lightweight music production kit for when I’m traveling.

Here is a synthwave track I made during a recent trip. As a creative challenge, I decided to write and mix it entirely in Cubasis, using Cubasis’ instruments and effects only.

The track is composed by seven instances of Micrologue for the synth parts, and four instances of Classic Machines for the drums. I have been neglecting the Micrologue ever since I bought Cubasis, erroneously judging it a less capable synth, but after playing with it for a while I can say that it’s a quite an enjoyable and potentially overlooked instrument, especially with the recent addition of the arpeggiator/sequencer module, which is fantastic to create rhythmic chord patterns and pulsating arpeggiated sequence that are so prominently featured in this track. I like being able to set velocity, gate, and pitch on a per step basis. The presets are great and inspiring, and it’s relatively straightforward to come up with interesting new sounds. It’s also very light on the CPU, which is crucial in an iOS-based music production environment. I definitely plan to use the Micrologue in future tracks, most likely by complementing it with the amazing Moog emulations.

I used Cubasis' Classic Machines for the drums part. I'd like to see a bit more flexibility and fine tuning on a per sample basis, although this limitation can be easily circumvented by creating dedicated tracks for each drum part.

As for the effects, they are all Cubasis' own effects (including the Waves one for mixing/mastering), with the exception of DAW cassette on the master track for a bit of tape saturation, as I couldn’t achieve quite the same results with Cubasis’ own effects.

All in all, the workflow in Cubasis is efficient and gratifying, even with the well known limitations such as lack of grouping arrangement and ability to change the tempo mid-song, but I'm sure these features will be implemented in a future update. I'm definitely going to use it again to make new songs, this time incorporating the mighty Moog synths and other external effects.

Enjoy and thanks for listening!