iOS Basics: How Do I Get Started Making Music On iOS?

My own effort to flesh out the Knowledge Base a bit. Starting from the very beginning. Please contribute your thoughts and additions. Especially corrections... feel free to copy and edit, this is in no way proprietary. Also any other introductory app choices would be helpful. Thanks!

Also, if anyone cares to volunteer for a tututorial, beginning or advanced please let me know. I can do a couple, but my knowledge, even on a basic level is limited. And maybe some of you already have videos that would be helpful to post.

To the reader: feel free to ask any questions you may have about the material discussed. Your questions, in fact, will provide a service and help detail the overview described here.

You can make music using just an iPad and a single app. That is about as basic as you can get. Even an older iPad will do fine and can take you some distance. The oldest I would suggest would be an iPad 2 with 32gb ROM memory. These can be bought used on eBay for a song... well, you may have some songs already you are willing to barter, but don’t take that literally. With an older iPad you are limited in the music applications you can buy because of the older operating systems that cannot be updated. But for a test drive an iPad2 will do.

Many, if not most, music making apps have some kind of note generating surface contained within. Various types of keyboards, fretboards, or drum pads allow you to input notes and get a resulting and more or less musical sound output, either through the iPad speaker(s), plug in earbuds or headphones or connection to powered monitors or home entertainment system. Do not judge the sound quality of any app without considering the output device. Actually, I find standard Apple earbuds to be excellent. Note: in iOS music production latency can be an issue. Latency is the delay of sound between inputting a note and hearing the result.... like you get when playing a real pipe organ. The electronic delay, however, is in milliseconds, but even low ms delay can interfere with the tactile feeling of playing notes. Bluetooth technology has inherent latency in the technology at this point, and though it is brief still may be disconcerting (especially at a concert). So wired earbuds, in ear monitors or over the ear headphones are best to use.

Naturally, external note generating hardware can be plugged in to an iPad and they are various, from traditional keyboards to pad systems to MPE (Midi Polyphonic Expression) and even electric guitars and microphones. But that is for another discussion. For now the iPad itself will be used for discussion.

So you have an iPad in your hands. What next? Well, lunch is always a good idea, but if your stomach is full you will need to make a virtual trip to the Apple App Store. Btw, you can make music using Android, but for anything approaching real music production software on a tablet the iPad is the hardware. You really need only one app to get started, though amassing a small collection seems to come with the territory. A great first app could be the legendary ThumbJam. It provides everything you need for an entry level expedition and costs seven bucks. Yes, a mere seven greenbacks for a quality musical experience. One of the percs of iOS music making is the affordability and many apps are free. Perhaps other contributors will list some here. I choose ThumbJam because it is user friendly and has quality sounds (also known as patches, voices, presets and other terms you will stumble upon). A sound can be a dedicated (and often malleable) synthetic, synthesized or electronic patch or an emulation of an acoustic instrument. And virtually all acoustic and percussion sounds can be found in iOS apps. TJ (ThumbJam) has a great collection of instruments onboard and downloadable at no extra charge. Actually, the features I will cover here are far less than are present in the app, but this is only to get the basic idea across of how one gets music out of an iPad.

When opening the app you see this: 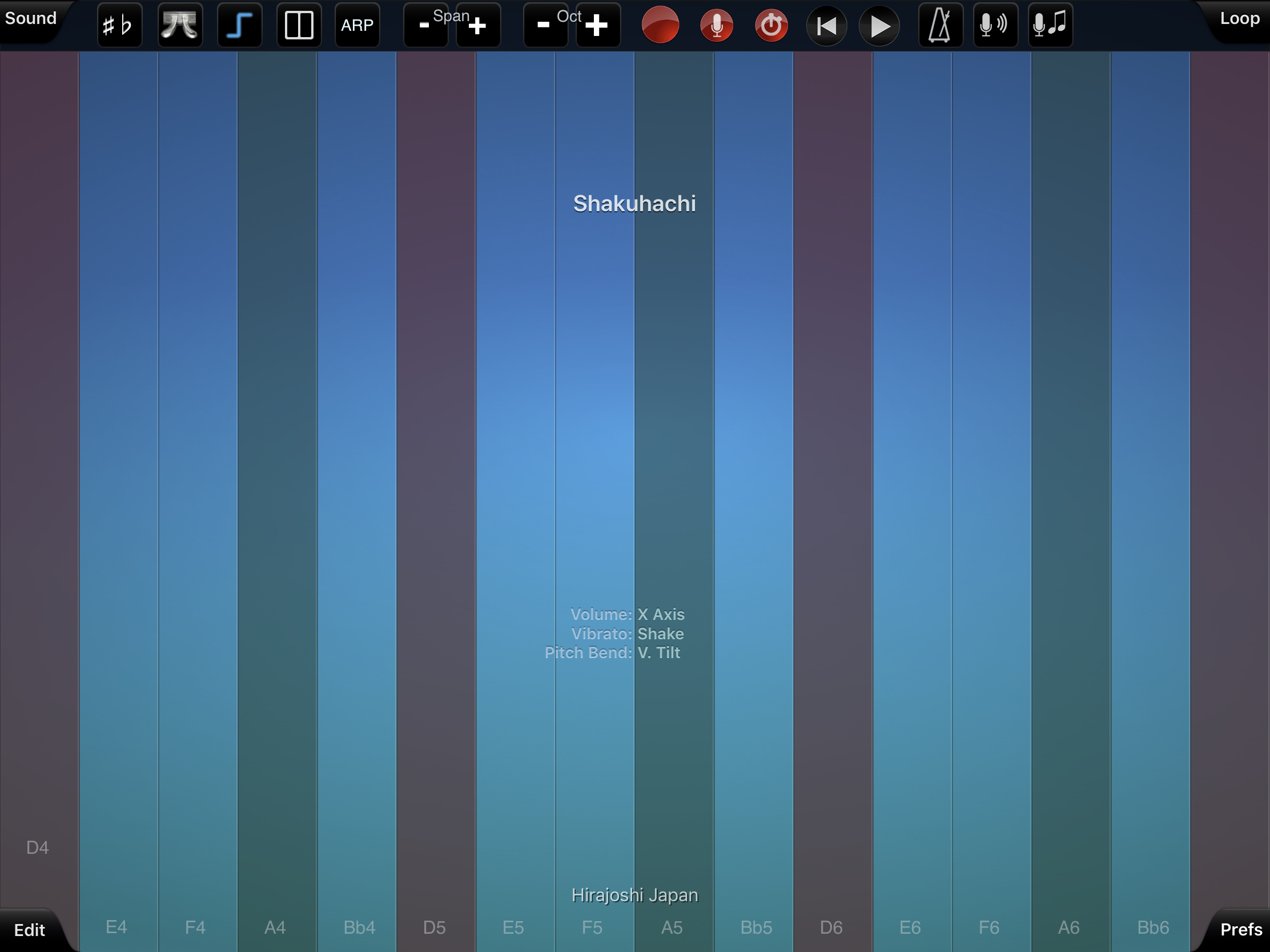 The key features to note are
1/ the somewhat unusual keyboard
2/ the toolbar across the top on which some of the features are:

A sound bank, a control for the number of keys displayed on the screen, from very few to a lot!, a control of what keyboard octave is implemented, allowing you to access all 88 keyboard notes, though not all at once.

For that you would need a hardware keyboard. But the idea here is to demonstrate how to make music on an iPad, not necessarily play it in all its glory. Still there is a lot of fun to be had messing with this in various unexpected places. Musicians actually make entire albums just using an iPhone and a small external keyboards, so really almost anything is possible once you know a little bit.

To continue, there is a recording function so you can capture your performance in a limited fashion, a metronome, a menu for choosing different scales (which often allow you to play without hitting a “wrong” note), a menu for editing each individual sound, an arpeggiator (a simple sequencer that allows you to convert two or more notes in a continuous loop in various patterns) and other features. If you are brand new to music production just this limited amount of control opens up a world of musical possibility.

Finally, ThumbJam is motion sensitive. Each individual sound has different physical motions that alter the sound. For example, shaking the iPad on a flute patch will create a vibrato effect! Amazing, but true.

There are other apps even more versatile called DAWs (Digital Analog Workstations) that give much greater ability to create fully fledged multitrack recordings as well as large instrument banks and effects choices, but to get started on the iOS journey just getting a few simple apps will give hours of enjoyment. If you get hooked... well, my condolences, but you will find many likeminded mourners here on audiob.us. It is truly an amazing ride.

Stay in touch for more primers on making iOS music. And ask questions!