The Beast. My rig, possibly of interest to you guys.

Over the past year I have been constructing "the beast," which is a solo studio performance machine built out of hardware, iDevices and lots and lots of cables.

But, I figure for you guys, the important part is the iOs stuff...
So.
Currently I have 2 I pad 4s, ones a dedicated effects processor running DJFX, the other is whatever I need it to be, Korg M1, K machine, lately Groovebox, Sektor, Mid Eastern Drummer, fugue machine, etc.
1 Ipad 3, (the one showing up this week is also an I3) in an Alesis io Dock 1(You can make it work, but you need the adaptor slide and you have to shove it in there real good in order for it to connect, but it does work.) Currently this one is running figure, and since the io dock can submix from another source, it's also taking audio from one of the other pads. In the past I used this for live looping with loopy, but have recently switched over to doing midi looping in ableton which seems a bit less problematic.
1 Ipad 2, also running figure (this one just does the bass, the other just the leads).
3 Ipad 1s, 1 is a dedicated controller, and I am bouncing between touchable, lemur, thumbjam and sound prism.
The other two are sound sources, they both run atmospheric samples, on random through the music player, magellan synth and the project M visualizer overtop both of those, because it looks cool and doesn't interfere with playback.

Currently other than the one in the iDock everything is running on wireless midi, though I'm working on getting bluetooth up and running via Apollo and of course ableton link. Though truth be told, I don't have many latency or timing issues come up. Once in a blue moon there will be a weird glitch, but it's not that big a deal.

Obviously this rig is not built to go on the road. I have two of my own bands I tour with every year, and myriad other projects I guest with, so this is an inside pet.

I've attached a picture of the beast, if anyone is curious I also have routing diagrams and other stuff drawn up.

If you want to hear how it sounds, this is a record I just made available to my patreon people.
https://www.dropbox.com/s/3zo131vvna6xcnt/30 Hopeful Machines - Seres Anteriormente Existentes.zip?dl=0

And if you want to watch it in action, I do performances most nights which can be viewed and are archived on my facebook page.
https://www.facebook.com/Stevenlikeness 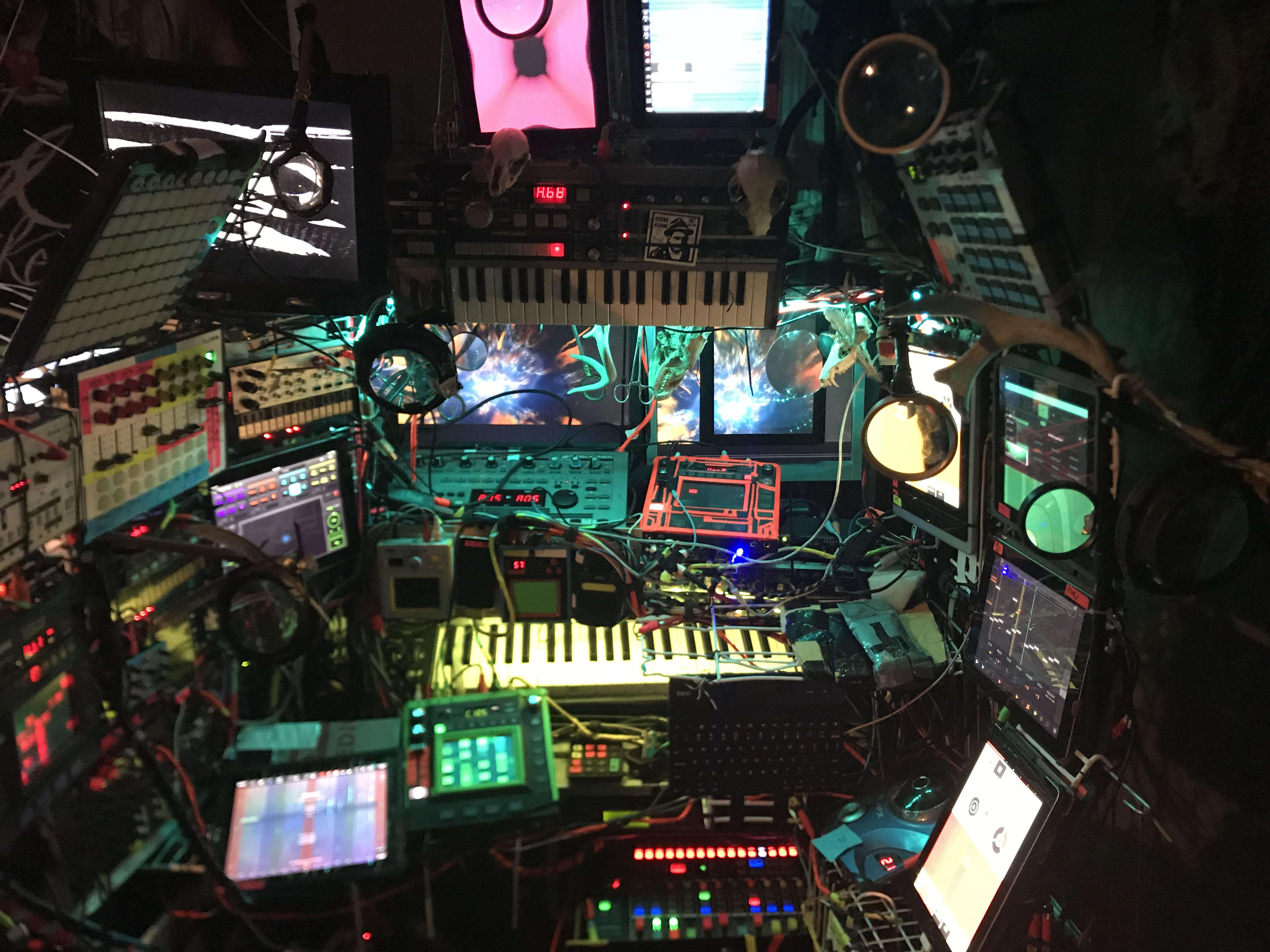 *I wasn't sure which directory this post should go in, if this is the wrong one, I will be happy to delete it.