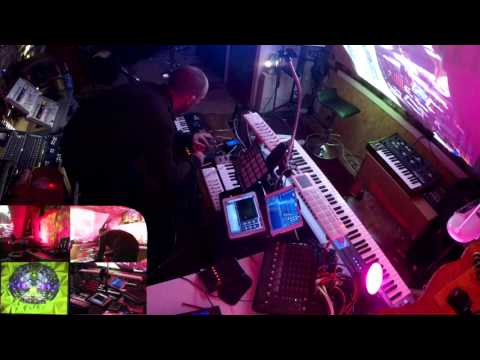 Der goldene Schnitt
Live Ambient Session
Reflection 1
Friday night 2015/12/12
First Session with the good old Nanostudio, my first DAW on the iPhone and still one of the pearls in the MusicApps Universe.
Thx to Matt the Developer of Nanostudio from Blipinteractive
http://www.blipinteractive.co.uk/

And with my bread and butter apps Drumjam & Thumbjam, Animoog, Audiobus, Loopy DJay2

Recycled from the moment & from different sources....:

Reused two of his songs from his first completed album of music made in NanoStudio all released under a Creative Commons licence in 2011. You can download the Nanostudio ProjectFiles .NSP there, great, thx jan ;-)
Apps he used:
Nanostudio, Thumbjam, Fairlight CMI, Argon, Ellotron, Ampitude
Song 1: reflections_on_past_dreams
Song 2: serenitys_breeze

The Vocals and the Visuals down in the left corner come from:

Sacred geometry is the ancient art, science and philosophy of space and proportion. It addresses the laws of creation
and the inner workings of nature. It has been used by civilizations around the world for thousands of years as a way of
connecting with the harmony of Universal Order.
New Zealand artist and cosmologist Jonathan Quintin takes his audience on a visual journey beyond the veil to reveal
a profound order and sublime beauty that exists on the archetypal planes of creation. He shows how sacred geometry
can help us move in harmony with the changes rather than be overwhelmed by them.
Thx Jonathan for your passion too.....

Its one of the pieces in my life which i believe its "true" and it makes "sense"
My Projects and works under
Der golden Schnitt engl. the golden cut
are influenced by these kind of elements, the harmony and the resonance and the noise of course ;-)